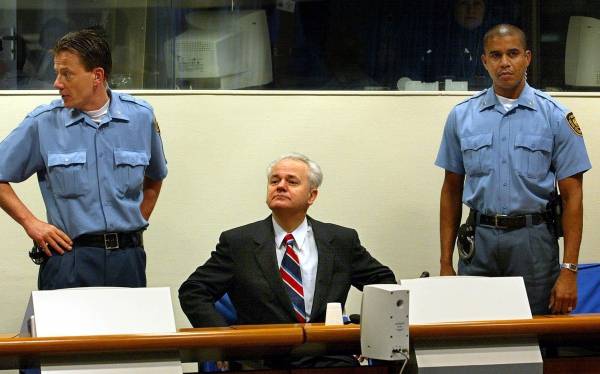 In his last speech to the UN Security Council on December 6, 2017, ICTY President Carmel Agius expressed satisfaction that out of 161 persons indicted, all have been tried or have died, representing a 100% success rate, although the difficulties were many. This is all the more surprising because the first international criminal tribunal had everything against it. It was created in 1993, in the midst of war in Bosnia- Herzegovina, with no access to the former Yugoslavia, and was pushed by founding fathers who did not even want it to succeed! JusticeInfo.Net, Fondation Hirondelle's website on international justice, takes a look back at this history.

The ICTY was proposed to the Security Council by French Foreign Minister at the time Roland Dumas (Resolutions 808 and 827) as a tool to deter crimes but above all to fend off accusations that he and President Mitterrand were complicit in crimes committed by Serb forces, and without wanting the tribunal to become really efficient. The strange moral of this story is that politicians sometimes decide things out of short term interest, but political equations and contexts change, to the point that the ICTY ended up working well because it got collaboration to arrest all the accused. This would have been unimaginable at the time of its creation when Milosevic, Karadzic and Mladic were parties to peace negotiations. Like a cat, the ICTY had several lives. Here we look back at some of them.

The tribunal was a venture conceived by activist lawyers, first of all the determined Italian Antonio Cassese and flamboyant Egyptian American Cherif Bassiouni.  It started with the shocking images of ethnic cleansing and photos of emaciated prisoners in Bosnian Serb camps in summer 1992. In response to public outcry in the West, the UN Security Council in May 1993 created the International Criminal Tribunal for the former Yugoslavia. Overcoming many difficulties, the ICTY drew up statutes that merged the two big judicial traditions – common law and the continental system –, and became operational.

The first ICTY Prosecutor was Richard Goldstone of South Africa. He spoke out strongly, vowing that nothing would stop him in his determination to indict the biggest war criminals. But as long as the war continued in Bosnia (1992-1995), the tribunal was more or less incapable of action. It indicted lesser suspects apart from Bosnian Serb leaders Ratko Mladic and Radovan Karadzic after the Srebrenica massacres. The ICTY also took a big knock from the massacres in Srebrenica – the worst crime committed in Europe since 1945 -, because it had been created partly to dissuade the commission of such crimes.

Prosecutor Louise Arbour who came after Goldstone was the one who saved the ICTY from sinking. She put pressure on NATO countries that had deployed contingents in Bosnia but were refusing to arrest ICTY indicted persons for fear of reprisals, threatening to expose their cowardice and hypocrisy. And so it was that arrests began and continued, allowing trials to be held and justifying the existence of the ICTY, whose rules did not permit trials in absentia. Louise Arbour ended her mandate with a big splash, indicting for the first time on May 24, 1999 a sitting head of State, Yugoslav President Slobodan Milosevic.

The NATO military intervention in Yugoslavia in 1999 was marked by a 78-day bombing campaign (24 March to June 10, 1999). This was a situation that no-one had anticipated, for the main donors and political supporters of the ICTY were suddenly parties to the conflict. Moreover, it was the contingents of certain NATO countries that carried out arrests in Bosnia. NATO spokesman Jamie Shea summed it up rather brutally when he remarked that “you do not bite the hand that feeds you”. The ICTY, accused of being both judge and party, set up a working group to investigate allegations of crimes committed by NATO forces. Carla del Ponte, who succeeded Louise Arbour as Prosecutor, was led to conclude that “there is no basis for opening an investigation into any of the allegations or into other incidents related to the NATO air campaign. Although some mistakes were made by NATO, the Prosecutor is satisfied that there was no deliberate targeting of civilians or unlawful military targets by NATO during the campaign”. Most of Serb society came to view the ICTY as the judicial arm of NATO and so illegitimate. This is what Slobodan Milosevic repeated incessantly during his trial (2002-February 14, 2006). Serb public opinion became all the more hostile towards the tribunal when it failed to prosecute the main perpetrators of crimes committed by the UCK, including organ trafficking denounced by Dick Marty in a 2010 report to the Council of Europe.

During the last period of its existence, external events were calmer for the ICTY. There was, however, the assassination in 2003 of Serb Prime Minister Zoran Djinjic, a fierce opponent of Milosevic and supporter of collaboration with the ICTY. As pointed out above, some judgments were especially controversial. The death on March 11, 2006 of former Serb president Slobodan Milosevic before his judgment could be pronounced was a big blow to the ICTY. It was however compensated by the trials of the two Bosnian Serb leaders Radovan Karadzic and Ratko Mladic, the main architects of ethnic cleansing policies in Bosnia. The last trial, that of six Bosnian Croats who were found guilty on November 29, 2017 of war crimes and crimes against humanity, concluded with the spectacular suicide in court of Slobodan Praljak, one of the accused. Opinions will continue to differ on the ICTY’s achievements, but the life of the tribunal was never monotonous, right up to the last moment.