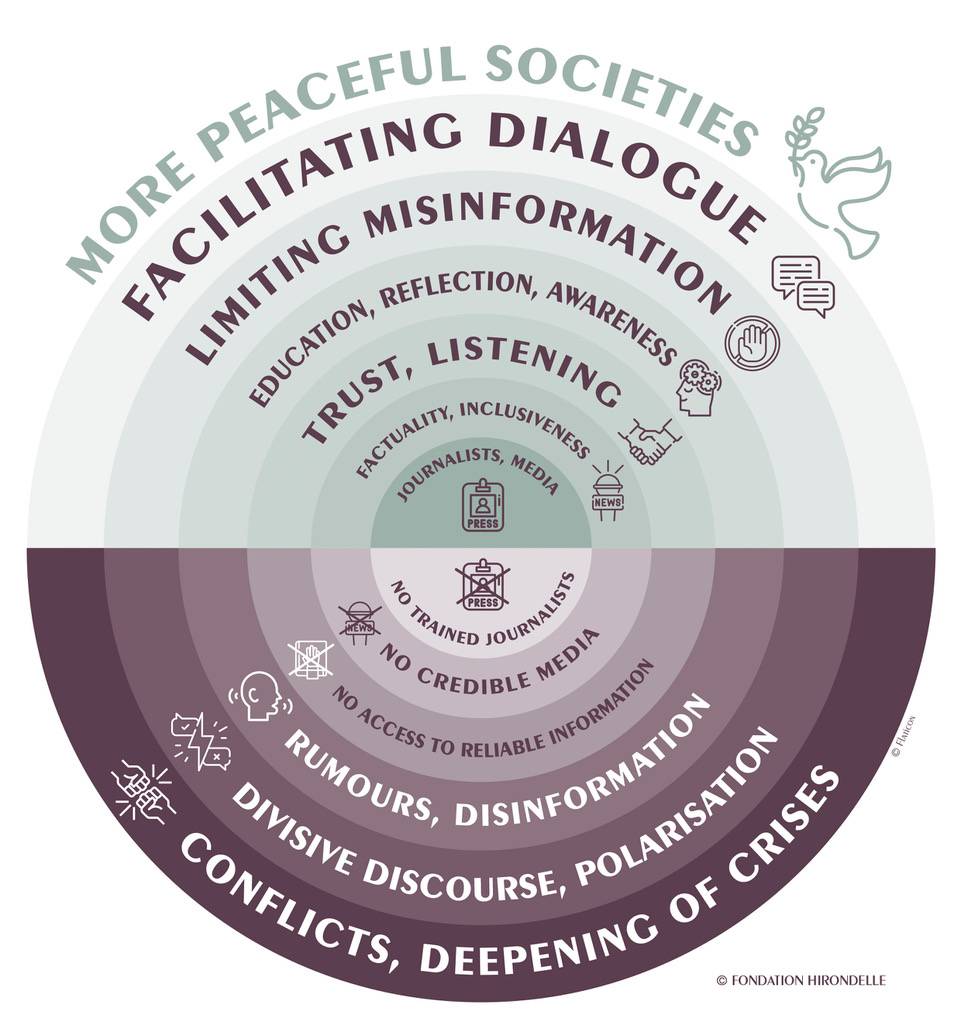 Sticking to the Facts, Building Trust: our Cure for Disinformation

We have just celebrated World Press Freedom Day on Monday 3 May. The theme chosen by UNESCO this year was "information as a public good". The vital and public interest role of access to quality information has been at the heart of Fondation Hirondelle's work for over 25 years. It is this experience that we draw on today to explain our approach to responding to disinformation, a plague that undermines all societies around the world.

Fondation Hirondelle's approach to disinformation centres  on the fundamental principles of  journalism and on the lessons learned from over 25 years of applying these principles in highly fragile contexts, where access to reliable information for the majority is not a given, and where rumours, hate speech and propaganda undermine peace building and development.

Our response to disinformation is based on two complementary axes: sticking to the facts and building trust.

STICKING TO THE FACTS

CONDITIONS: The act of identifying and effectively communicating facts is not a simple task, it is a profession - that of a journalist. This a profession that must be learned. It requires training, technical and financial resources, and time. Journalists who are poorly trained or poorly paid are more likely to deliver a poor handling and reporting of the facts. Such journalists can then become vectors of mis- or disinformation themselves, and lose the public's trust, at the risk that audiences no longer distinguish between providers of information and providers of disinformation.

To ensure that factual information processed by journalists reaches the public, the public must have access to credible and professional news media. This access must be easy and must be free or low cost, in order to reach the greatest number of people, especially the poorest. Traditional media, such as radio, thus remain effective vectors, alongside or in combination with online and social media broadcasting. These media must have the technical, human and financial means to ensure the production and dissemination of their information.

CONDITIONS: Education about the way information is processed, shared and consumed (referred to as "media literacy") is also required to help re-establish trust between the media and the public. This does not entail journalists preaching or justifying themselves, but rather giving people the tools to question how and from where they get their information, so that we can all take a step back from our cognitive biases, from the tricks our brains play on us. In order to be credible and to be heard, journalists themselves must know how to question themselves, and sometimes they must share their own doubts - and even their mistakes - with the public. Media literacy programmes can be produced and broadcast by the media themselves and/or in partnerships with universities, researchers and other civil society actors. See for example our series of video masterclasses in journalism.

To governments and development aid donors

To companies and web and social media organisations:

Download here the full version of our note: "Sticking to the facts, building trust: our cure for disinformation".