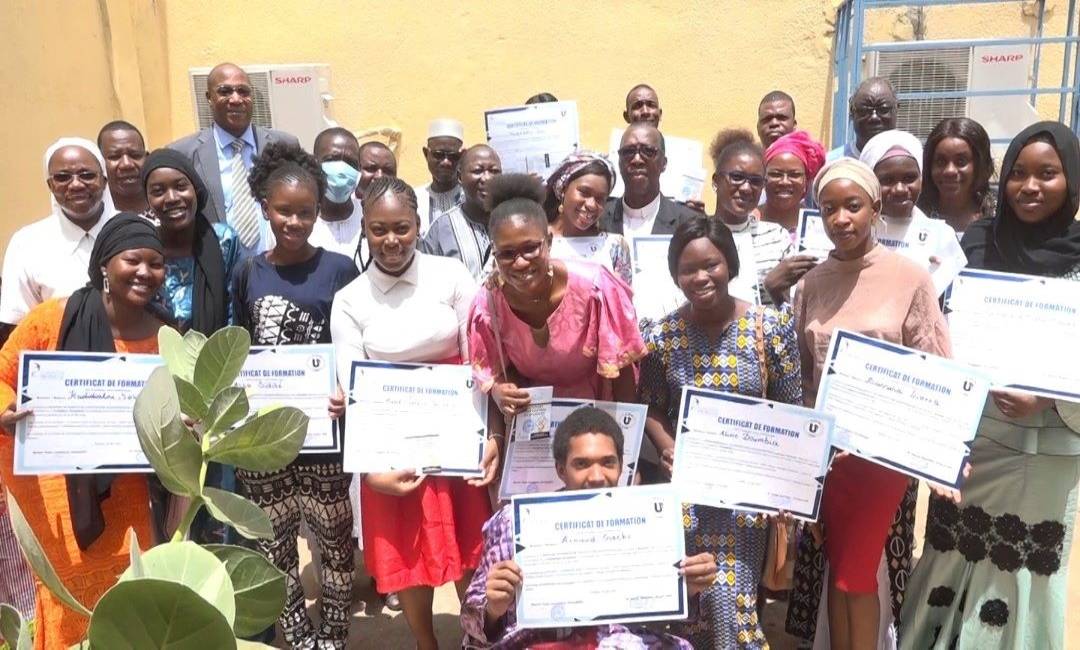 Between 5 and 20 May, we organised an intensive training course on radio production that took place at the Catholic University of West Africa-University of Bamako (UCOA-UUBa). Fifteen students benefited from the experience of Fondation Hirondelle trainers and staff from Studio Tamani, our project in Mali.

Our partnership with the Catholic University of West Africa-University of Bamako (UCOA-UUBa), signed last February, has resulted in a new training session for student journalists. The focus was on radio production between 5 and 20 May.

Two male and thirteen female undergraduate students were involved in this fortnight, set up by our trainer Martin Faye with the help of Moussokoura Konaté, head of Studio Tamani's partner radios, Békaye Cissé, technical head of Studio Tamani, as well as Lévy Dougnon, journalist and teacher at UCAO.

Before tackling the theme of radio production, several modules were offered to participants over two days to review the basics of journalism. These covered basic radio techniques, digital editing, the different radio formats and genres, and the functioning of an editorial office. Elements on ethical and editorial principles were also included in the training.

After this refresher course, 10 days were devoted to exercises in radio news programme production. Each day, students had the opportunity to try out a different role within the newsroom (presenter, editor, reporter, special correspondent, etc.). It was also an opportunity to work on digital editing techniques, as well as the different radio formats (paper, sound, telephone interview).

As at the end of the two training courses set up in 2021, the participants expressed their satisfaction at the end of these two weeks of work. An opinion shared by the president of UCOA-UUBa, Abbé Dr. Clément Lonah and the Dean of the Department of Journalism and Communication, Reverend Father Dr. Alexis Dembélé.

The assiduity of the participants, as well as their progress, was underlined by the management team, but also by some officials of the University, who came to attend the listening and criticism sessions of the radio news programme. The smooth running of this fortnight was, however, hampered by a number of technical problems concerning the lack and maintenance of computer equipment and power cuts.

A call to maintain this training, and even to extend it to other audio-visual media was also made at the closing ceremony by Dr Alexis Dembélé. The event was covered by a dozen Malian media, including three television channels. The will to continue the fruitful collaboration with Fondation Hirondelle and Studio Tamani was also formulated. An evaluation of the partnership, carried out by both parties to the Convention, will be undertaken in July.

A second session of a similar nature is planned for the coming weeks. It will be composed of another group of students of the same level. This time the focus will be on reporting and interviewing, the major genres of journalism. There will be a session on radio debate moderation and a seminar on Media and Governance.