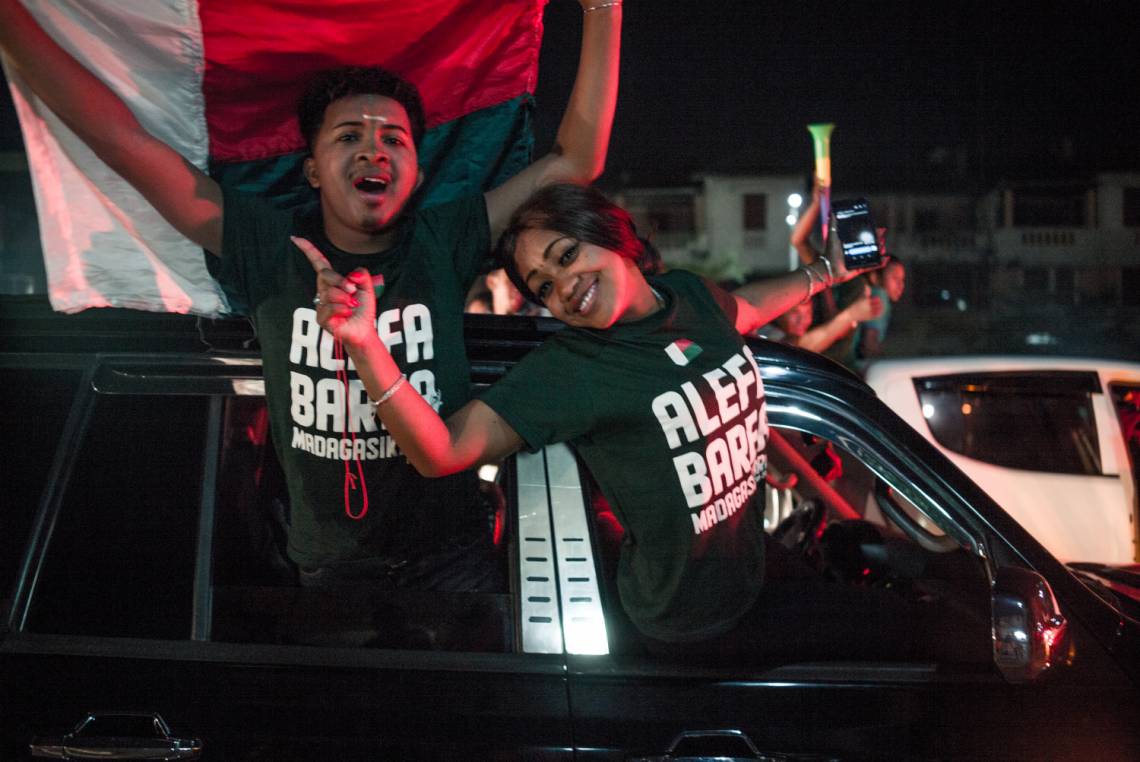 ©RIJASOLO / AFP Young Malagasy have a lot of expectations and they need platforms to express themselves. Here young fans in Antananarivo celebrating the victory of their national football team against the Democratic Republic of Congo during the Africa Cup of Nations on 7 July 2019

Radio Sifaka : Our new project in Madagascar with the United Nations

Fondation Hirondelle teams are curently working on the creation of a new radio station dedicated to youth in Madagascar, in partnership withthe UN and with support from the Peacebuilding Fund. Staff recruitment is underway.Programmes will start broadcasting this autumn after a training phase.

Radio Sifaka is nammed after a famous lemur species in Madagascar. It is a positive symbol also refering to the sound these animals do to communicate. This new radio station aims to give voice to new Malagasy generations and allow them to dialogue and spread their opinions peacefully, in order to contribute to peacebuilding in a country facing regular political tensions and social crisis. In a context of political polarization in the media landscape, radio Sifaka will also provide reliable, quality non partisan news to young women and men in the country. It thus will reduce their fragility and strengthen their position as responsible leaders as it will help them making decisions in their daily and civic life.

The team of Malagasy journalists who will be responsible for producing the news and programmes, as well as a national editor and director, are currently being recruited in Antananarivo.A Fondation Hirondelle team is on site to ensure the hiring process as well as all the other technical and administrative aspects necessary for the creation of the radio. They work closely with the teams of UNDP (United Nations Development Programme), UNICEF (United Nations Children's Fund) and OHCHR (Office of the High Commissioner for Human Rights), and with the Malagasy authorities and partners. A first project committee was held on Friday 28 June to present the project to the partners and discuss its implementation. It brought together representatives of the national authorities (Ministry of Communication and Culture, Ministry of the Interior, Ministry of Population, Social Protection and Promotion of Women, Ministry of Youth and Sports and Ministry of National Education), officials of the United Nations agencies in Madagascar involved in the project, as well as representatives of civil society, including youth, and representatives of the media.

Radio Sifaka will start broadcasting this autumn, after a period of training for its teams, and the development of a programming grid that meets the information needs of young people, both in urban and rural areas. Its programmes will be broadcast in the capital city by Radio Sifaka, as soon as its frequency is obtained, and by a network of local partner radios to cover the national territory for a better impact on the population.

The Radio Sifaka project was designed and initiated by the United Nations system teams in Madagascar, in particular the UNDP, UNICEF and OHCHR agencies. Fondation Hirondelle was selected following a call for tenders as a technical partner for the creation of the radio and the training and supervision of the teams during 18 months. The project is funded by the United Nations Peacebuilding Fund and Gender Equality and Youth Initiative GYPI.