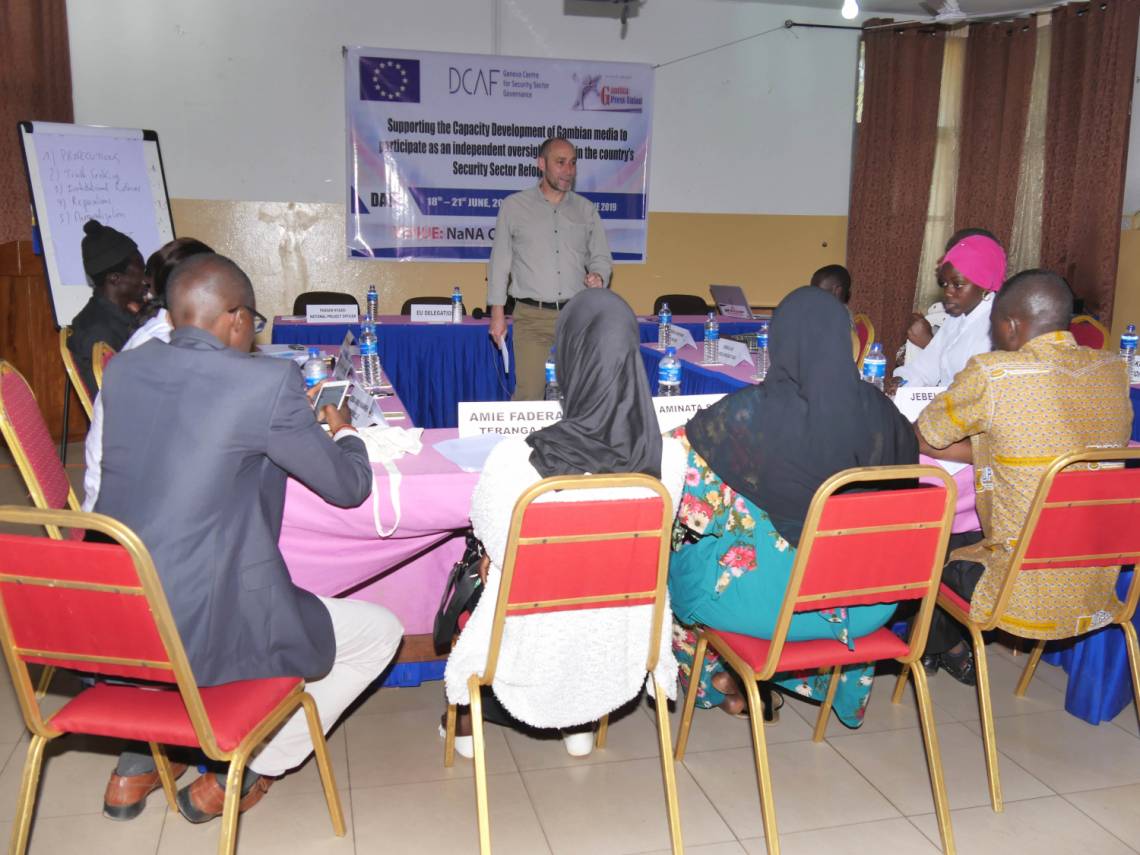 Gambia : our journalists training on the Security Sector Reform

From 18th to 28th of June in Banjul, in Gambia, Thierry Cruvellier, Editor-in-Chief of JusticeInfo.net, Fondation Hirondelle website dedicated to international Justice news, trained 30 local journalists to cover Security Sector Reform (SSR) in this country. A partnership financed by the Center for Democratic Control of Armed Forces (DCAF) with Gambia Press Union (GPU).

In June, Some 30 journalists participated in two training sessions on covering security reforms in the country. The workshops, combining practical knowledge and theory, addressed the tools for investigating the work and transparency of security and justice institutions. This training was thus intended to support the Gambian media in reporting the reforms expected from the country democratic transition.

Among the topics addressed by the experts from Justice Info.Net and the Gambian teachers was the role of the media in ensuring the proper functioning of justice and security-related institutions in the context of current reforms. Journalists also worked on information retrieval techniques and verification and they reviewed some precautions to be taken when covering sensitive topics.

They made the most from the comments of some members of the parliament and security forces in charge of the reforms and they paid attention to the close connections between SSR  and transitional justice.

At he beignning of 2019, the DCAF which is established in Geneva, also commisioned to Justice Info.Net to write a guide on journalistic coverage of SSR processes in the Gambia. This guide will be distributed to all Gambian media.

the journalists who participated in this training highlighted skills sharing and the importance of debates as resources for their profession. This project, funded by the DCAF to the tune of 24,000CHF, has thus contributed to the strengthening of the media in a region where journalism remains difficult and hazardous: Gambian media particularly suffered from the dictatorial regime. Today, the verity , reconciliation and reparation Commision, where meet the former military chiefs involved in the suppression, and the Security Sector Reform are the core of the democratic transition in Gambia. Their role is fundamental to cover and explain its issues and to ensure that institutions respect their duty towards information access and rule of law,  said Thierry Cruvellier.