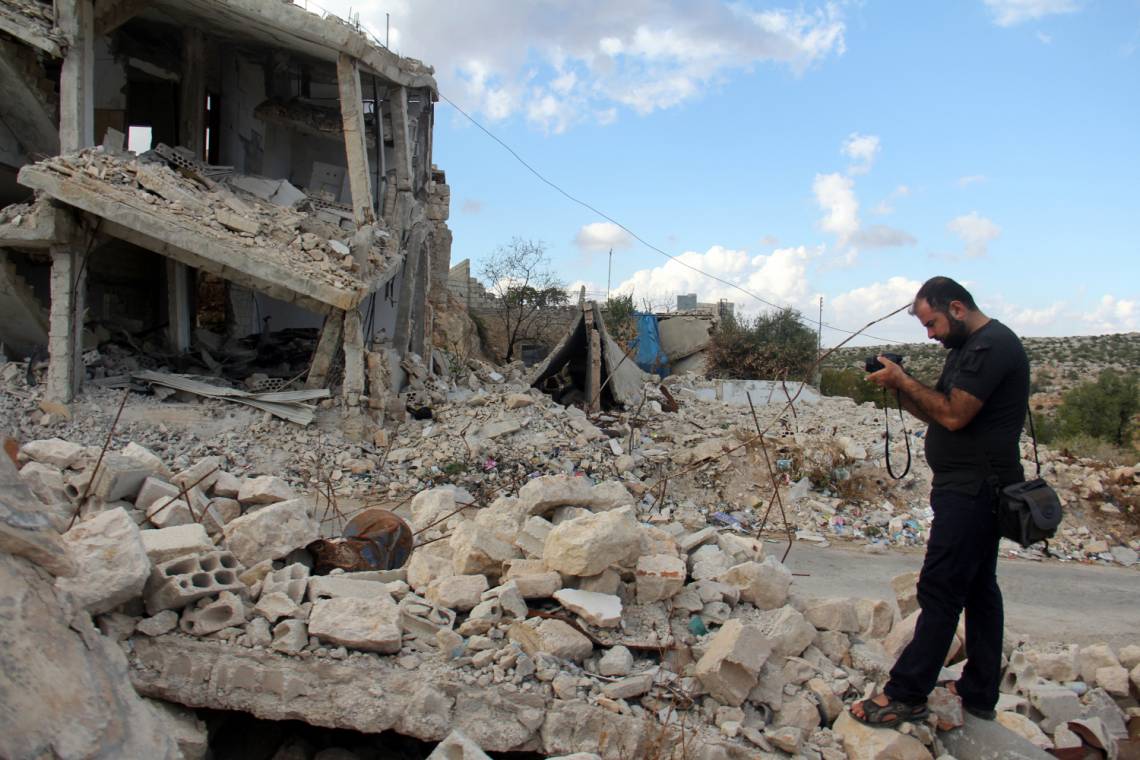 ©Omar Haj Kadour / AFP In the Syrian village of Marayan (Idlib province) after a bombing, October 2017.

Reporting the complexity of violence - interview with Jean-Paul Marthoz

As an investigative reporter, professor of international journalism and advisor to human rights and journalism protection organizations, Jean-Paul Marthoz has drawn on his experience to develop principles of conduct that enable journalists to report on the complexity of conflicts without fuelling violence.

What is your experience as a journalist in situations of extreme violence?
Jean-Paul Marthoz: I covered insurgencies, dictatorships and the drug war in Latin America in the 1980s for Le Soir in Brussels. I did assignments for journalistic organizations in Algeria, east and southern Africa in the 1990s, Lebanon in the 2000s, Russia, Tunisia and Turkey in the 2010s. Since then, I have been observing and documenting these situations, notably for human rights NGOs and international organizations. I have just started a course on media and terrorism at the Catholic University of Leuven in Belgium.
In your research and writing , you have tried to synthesize some rules so that journalists faced with situations of extreme violence can report on them without fuelling them. What are these rules?
First, to be inspired by a strong doctrine of journalism, based on a sense of humanity and responsibility, while respecting the essential principle of the profession: the search for "truth". Who is responsible? Why does a society tip over into extreme violence? We need to open up the wide angle, not just cover the battlefield but try to understand the impact of extreme violence on the whole of society, on its most fragile members. We must investigate those who profit from this violence and chaos, but also talk about all those who fight to stop the violence and preserve a minimum of humanity and solidarity.
We also need to look for the roots of this violence in history, social relations, ideologies and international relations. This broad angle requires investigating the international actors who fuel the conflict or who do not do enough to stop it. We need to situate the violence both globally and locally, to establish the links between this violence, which is sometimes geographically very distant, and the reality of the large or small powers that intervene, and the possible role of their governments and companies.
Finally, it is necessary to preserve one’s independence in relation to all the participants, to exercise a critical eye with regard to all the testimonies. But we need to do this without moral ambiguity: neutrality between a genocidaire and his victim is not a journalistic virtue. The most eminent journalists (Joseph Kessel, George Orwell, Martha Gellhorn, Albert Camus, and more recently Anna Politkovskaya, Nicholas Kristof or Marcela Turati) have never been neutral or "impartial" when it came to defending human dignity. But this humanist approach must be maintained without compromising the search for truth.
In situations of violence, journalists also need to protect  their sources, not endanger people who provide information, who are often victims, witnesses or opposition activists. That is an abosolute must.

We need to be inspired
by a strong doctrine of journalism,
based on humanity
and responsibility

Has the emergence of social networks and their widespread use transformed these rules?
Faced with social networks, the work of the media is difficult. On the one hand, the media have never had a monopoly on information about armed conflicts: all actors (governments, armed groups, etc.) develop communication and censorship policies that can disturb or even dominate information. On the other hand, the Internet and even more so social networks have come to shake things up. A new universe of informers and disinformers, witnesses, commentators, agitators, specialists in influence strategies, has been added, disseminating masses of messages and opinions and complicating the work of selecting, verifying and interpreting the facts. These technologies and practices often play a role in accelerating violent discourse. Journalists, who have mostly learned to sort information on the ground, are now faced with a new battlefield online. And this is all the more true since the places where violence is happening are more and more often forbidden to them by the parties in conflict. They must learn to confront these different sources, to decode the veracity of messages posted on social networks, in order not to be influenced by the influence strategies of the different actors in the conflict. For journalists who are not specialists in the conflict zone, this is extremely difficult.
But as battlefields become less and less accessible to journalists, including local ones, these technologies are also exceptional tools to better cover conflicts and document extreme violence, notably through OSINT (Open Source INTelligence, including satellite images, citizen videos.). The work of Bellingcat, an independent international group of researchers, investigators and citizen journalists founded by the British journalist and blogger Eliot Higgins, seems to me characteristic of these new journalistic possibilities. He was interviewed by the team of international investigators in the trial on the crash of flight MH17 Malaysia Airlines, shot down in July 2017 in eastern Ukraine. By collecting thousands of elements (photos, videos, testimonies and so on) posted on social networks, and by processing this data, Bellingcat managed to identify the path of the missile from a military unit in Russia to a Ukrainian territory under the control of pro-Russian rebels, from which it was fired. In the same way, concerning the sarin gas bombings of Al Lataminah and Al Sheikhoun near Hama in Syria in March-April 2017, Bellingcat managed to demonstrate the involvement of the Syrian regime, whereas it was supposed to have destroyed 100% of its chemical arsenal a year earlier. Obviously, the journalistic use of these new technologies is only complementary to field investigations, when access remains possible.

Faced with
social networks,
journalists are
confronted with
a new battlefied
online

You have written a manual entitled Media and Terrorism for UNESCO. How do you analyze the challenges of covering extreme violence in a region like the Sahel, which has been experiencing it for several years?
I think that, like Afghanistan in the 1990s, the Sahel is typically a region that has long remained off the radar of the mainstream media because it was considered to be of little strategic importance and because the violence that took place there was of low intensity. But today, as this violence increases, we see how little expertise we have to understand it. Following this type of conflict over the long term is, however, crucial from a journalistic point of view: on the one hand, it responds to a "criterion of humanity" which seems to me to be central (distance does not justify our indifference), and on the other hand, it is a strategic necessity in order to better understand the economic, migratory and social phenomena which are affecting other societies, including those in the North, in a world that is becoming more and more interlinked. The crises in the Sahel also remind us that extreme violence is most often the result of a complex situation. The job of journalism is not to "simplify", but to make this complexity understandable.