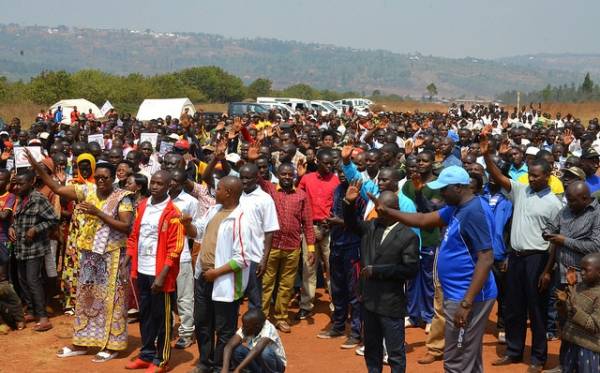 In Burundi, repression has been directed at all democrats in the country since 2015, even if there has been some ethnic targeting, according to French sociologist and African Great Lakes specialist André Guichaoua. He says the core hardliners of embattled President Nkurunziza’s government are still trying to use the country’s “impoverished and pressurized population” as a rampart against perceived foreign threats. JusticeInfo, Fondation Hirondelle's website on justice and reconciliation processes around the world, spoke to André Guichaoua:

JusticeInfo: What is your assessment of the current human rights situation in Burundi? Is there still a risk of genocide as some observers were saying last year?

Guichaoua: It is very difficult to assess the risk in a region that is regularly hit by widespread massacres. But collective memory reminds us that we absolutely need to be vigilant, especially when there are increased political tensions, to try to stop the fears and wounds of the past being revived for political ends. We should also remember that the spontaneous protests and imposition of Pierre Nkurunziza’s contested third presidential mandate had both Hutu and Tutsi supporters. Direct and indirect calls for ethnic mobilization were launched by officials and activists of the ruling CNDD-FDD party, to silence their opponents and re-mobilize their supporters around the ethnic majority.

The report of the United Nations commission of inquiry on Burundi, made public on September 4, clearly signals abuses of an ethnic nature (arrests, torture, sexual violence, insults, etc.), but also says it was not able to establish that there is a political will to destroy in whole or in part an ethnic group. The repression has been directed since May 2015 against all democrats aligned with the Arusha Accord and the Constitution which allowed a return to peace and the introduction of a pluralist democracy.

Has the slowness of the International Criminal Court (ICC) on the Burundi situation helped fuel human rights violations in the country?

Since late 2015, the International Criminal Court has regularly been receiving information from various sources – countries, organizations, witnesses inside and outside Burundi – documenting fairly extensively the abuses and crimes committed in the country. The UN Human Rights Council appointed an international commission of inquiry which was not allowed to go to Burundi. After several months of investigations in neighbouring countries and amongst verifiable sources, it submitted its report in August. The information in that report is precise and well-documented. It is certainly enough to ask the ICC to open investigations into suspected crimes against humanity.

But, as we all know, the ICC’s commitments vary according to the will and interests of States, which are all very attached to defending their sovereignty. The Court can certainly intervene if a State refuses to prosecute people that it is hunting, but the regional context is not favourable ever since the African Union recommended a break with the ICC. Burundi’s parliament anticipated this proposal, sponsored by Rwanda, by voting for the country to withdraw from the ICC with effect from October 26, 2017.This move was then followed by other African countries.

The diplomatic manoeuvres on September 28 and 29 during the UN Human Rights Council session in Geneva highlight the extent of the splits between countries and the important stakes around any decision.

By proposing a last-minute motion saying Burundi had suddenly decided to cooperate with an “independent” investigation, the African group signalled its hostility to any attempts to undermine the Burundian government. It knew well that it could not prevent the adoption of the European Union-sponsored motion calling for referral to the ICC, but the approval of two contradictory resolutions is an open defiance of the ICC which has only a few days to decide before Burundi’s withdrawal from the institution becomes effective.

Does the strategy of rhetoric against the UN and the EU pay for the Nkurunziza regime?

Whether it pays of not, this is the reaction of a regime that wants to show determination in the face of what it sees as external aggressions that seek to undermine it. This rhetoric is also meant to undermine the forces that helped liberate the country after ten years of civil war.

Given that securing the borders and clamping down internally have prevented any direct regional or international intervention, the Burundian authorities think that the current moves against them on human rights grounds by international institutions are a way to get around the Chinese and Russian vetoes in the UN Security Council. These vetoes blocked the attempts of Western countries to send foreign security forces to Burundi under a UN mandate.

Lumping together destabilization attempts by its opponents abroad (notably in Rwanda and Europe) and their foreign supporters supposedly coordinated “in Brussels”, the Burundian authorities claim there is an attempt both to restore the Tutsi military regimes and impose a neo-colonial tutelage. And so for them, the defence of sovereignty and national independence justifies all the sacrifices demanded of the Burundian people, who are asked to show total support for the regime and its leaders. They are called on to demonstrate in its favour and submit to austerity measures, as well as the many levies to the State and the CNDD-FDD party.

As most international donors are maintaining only indirect funding and humanitarian aid, the impoverished and pressurized population is being erected as the rampart of a governing hard core set on holding long-term power.

The government, heading a country which is already at the bottom of world rankings in terms of GDP per inhabitant, feels it has to prove daily that Burundi is not “on the brink of the abyss”.

Bujumbura’s rhetoric against neighbouring Rwanda seems to have lessened. Does that mean relations are starting to normalize?

After Rwanda was forced in 2013 to give up its indirect hold on eastern Congo through the M23 rebel group and dissuaded in 2016 from openly supporting an armed rebellion on Burundi’s borders or intervening militarily in that country, all observers thought that Rwanda would be happy with a weakened Burundi absent from the international scene, where Nkurunziza hardly takes part in regional and international meetings.

Observers also thought that Rwandan President Paul Kagame’s aim to capitalize on his regional and international reputation in authoritarian governance and management efficiency would force him to rise above the prosaic stakes of the Great Lakes region. Kagame is now chairman of the African Union, and so it is difficult for him to be both judge and party. And so a return to non-belligerent relations with Burundi translates a realist choice also imposed by his counterparts.

Nevertheless when Rwanda, not generally favourable to the ICC, failed at the end of September to support the African group’s motion at the UN Human Rights Council and instead approved the EU one recommending that Burundi be referred to the ICC, this provoked anger in Bujumbura.

Is inter-Burundian dialogue really likely to be resumed this October, as announced? And is it really possible that there be a face-to-face meeting between the government and the opposition in exile represented by the National Council for Respect of the Arusha Accord for Peace, Reconciliation and Rule of Law in Burundi (CNARED)?

Previous attempts at dialogue, which have been at a standstill since February, have been accompanied by various about-turns. When the spokesman for Tanzanian Facilitator Benjamin Mkapa announced in early September that the next meeting would take place in October, he did not say if the Burundian authorities had accepted the demand of Michel Kafando, the UN Secretary General’s Special Envoy to Burundi, that there be inclusive dialogue with the internal and external opposition. And this is very unlikely.

What are the strengths and weaknesses of the two sides, government and CNARED, on the eve of a possible resumption of talks?

The same as led to the failure of the session early this year. On the one hand, the authorities are closing the public space more than ever and preparing a constitutional transition which would ensure the long-term grip of the CNDD-FDD on the country’s institutions. "We will stay in power at least as long as the three decades of military regimes,” one leading CNDD-FDD official declared. How can the CNARED, which is still divided and lacking real leadership, negotiate the return of exiled opponents and a return to a democratic framework given the current balance of power? This is totally unthinkable for the hardline leadership of the CNDD-FDD, given what it has already imposed on the country to stay in power.