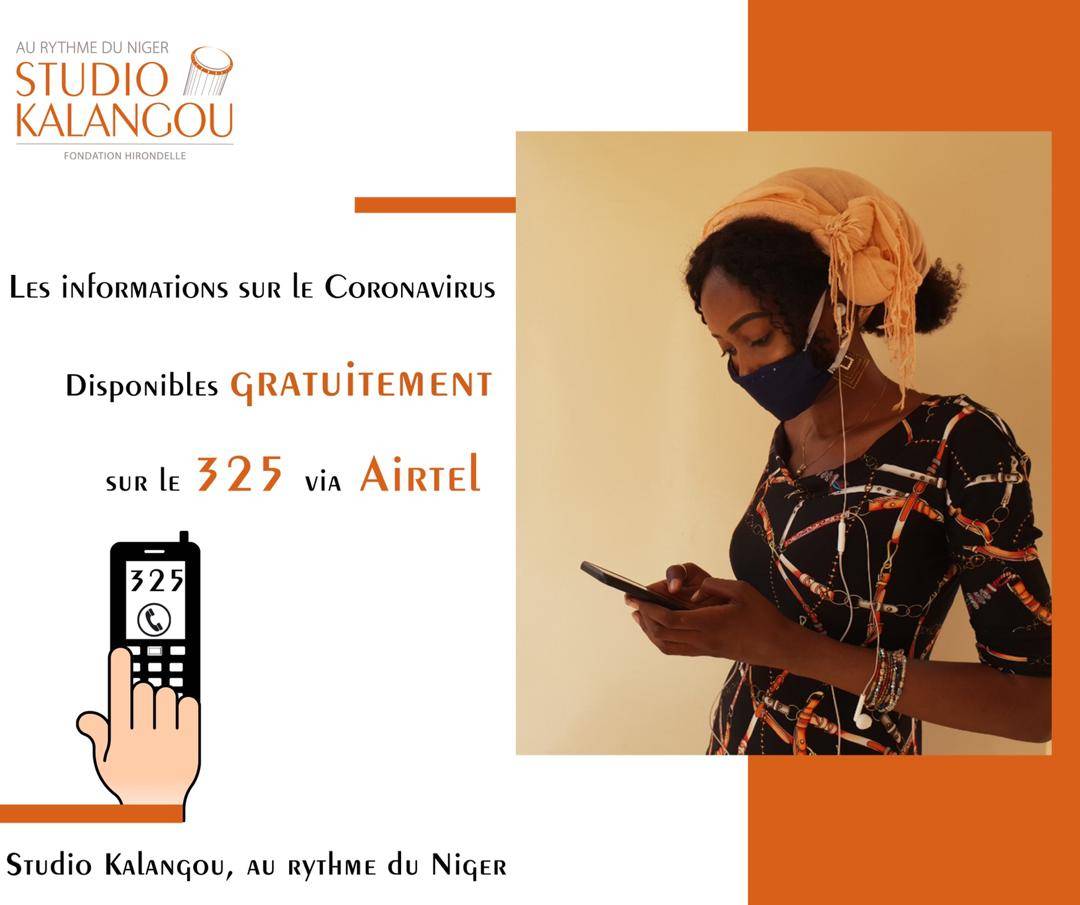 ©Studio Kalangou / Fondation Hirondelle Communication from Studio Kalangou on how to access via a toll-free phone number to its news on the Covid19 in Niger.

The audio programmes of Studio Tamani, Studio Kalangou and Studio Yafa have been accessible by mobile phone for several months now in Mali, Niger and Burkina Faso respectively, via a partnership with the social enterprise Viamo. Success is strong in Mali and Niger, and still modest in Burkina. In total, several million calls are received monthly.

Fondation Hirondelle's partnership with Viamo started in Mali in April 2019. Viamo is a Canadian company with a social vocation and active internationally. Its goal is to "connect individuals and organizations using digital technology to help them make better decisions." Concretely, Viamo acts as an interface between NGOs and mobile phone operators to provide content, audio programs or SMS, via mobile phone to local populations.

Studio Tamani, the news programme created by Fondation Hirondelle with URTEL in Mali in 2013, was the first to offer access to its productions by phone, via a local toll-free number launched in April 2019 with Viamo and Orange. Studio Tamani's daily news bulletins in five languages (French, Bambara, Peulh, Tamasheq and Sonrhaï), magazines and youth programs are accessible by phone by dialing "321". This new broadcasting platform reaches a large audience, complementary to the FM radio audience: 7,785,837 calls from 627,958 unique numbers were received in March 2020. The majority of the calls concern news bulletins (more than 5.9 million calls).

In Burkina Faso, the daily "mini mag" of Studio Yafa, the programme for young people created by Fondation Hirondelle at the beginning of 2019, and three weekly news bulletins have been accessible in five languages (Moore, Dioula, Fulfulde, Gurmencema and French) since the end of 2019 via the free number "321", again with Orange. To date, this number receives nearly 75,000 calls per month to listen to Studio Yafa programmes. This is still a modest audience, but one that should continue to grow in the coming months.

In Niger, Studio Kalangou, the radio programme created by Fondation Hirondelle in 2016 with a network of partner radios, has been accessible since the end of February on the free number 325 of the operator Airtel in partnership with Viamo. The programmes are available in 3 languages (French, Hausa and Zarma). They include the daily news bulletin, the weekend youth news, the daily magazine and the "lotti" short programme, a dialogue between two women on a daily life subject. News and awareness messages on the Covid19 pandemic, produced by Studio Kalangou, have also been available on the platform since the beginning of April. The first results are very encouraging: on the first month of broadcasting, in March 2020, 227,989 calls were received for Studio Kalangou programmes, from 36,876 different numbers. 63% of the calls concerned the news bulletin. 70% of people called several times. 63% of the listeners were asking for programmes in Hausa language and 33% in Zarma. The majority of the calls came from the regions of Niamey, Maradi and Tillabéry.

A student from Niamey, a listener of Studio Kalangou's programs by phone, sent this testimony on Kalangou's WhatsApp group : "(...) when I was in the village to visit the family, I had found my village in a drought of information especially in this period of coronavirus. Because there is no radio and no network to connect. But with the 325 number I followed all the news and informed the population of my community. (...) You've helped a lot with your awareness campaigns."

Fondation Hirondelle's partnership with Viamo in these three Sahelian countries will be strengthened in the coming weeks with the dissemination of new information and awareness-raising content on Covid19. It should also be extended to other countries on the African continent where both organisations are active.