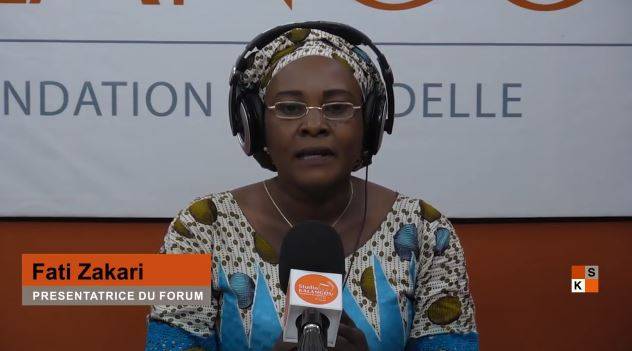 Studio Kalangou, Fondation Hirondelle's news program in Niger, which is broadcast each day by 45 radio stations across the country, launched on October 1st the broadcasting of video productions on 5 partner television stations in Niamey and Zinder.

Each week, three video reports and two debate programs of Studio Kalangou's talk-show "Le Forum" filmed in the studio at the same time as the radio version, are now broadcast by five television stations in Niger. These are four private channels in the capital, Niamey (RTT, Niger 24, Tambara, Labari) and television Gaskia in the city of Zinder, in the center of the country. The launch of this TV broadcast was made possible by a training program for Studio Kalangou journalists and technicians, which was initiated several months ago by Fondation Hirondelle with television experts and trainers. Studio Kalangou's productions are now available on all media: radio, TV, Internet, social networks, WhatsApp and mobile phones.

The signature of the partnership agreements with the Nigerien television channels took place on September 17, 2020 in Niamey. "The objective is not to create a new media that would compete with yours," explained Yannick Deville, Representative of Fondation Hirondelle in Niger, who runs Studio Kalangou, during this ceremony in the presence of the directors of the 5 partner television channels. It is rather a question of working together for better quality information for the people of Niger". The Deputy Director General of the Television Niger 24 testified on this occasion: "This is a very beautiful initiative. Private television stations like ours are looking for better productions, better content, so it is a good alternative for us to partner with Kalangou for the broadcasting of these productions". Abdoulaye Soumanam, Director of Information at RTT explained: "It is a mutually beneficial partnership. It will allow us to enrich our programs, since Studio Kalangou has a certain aura here. Kalangou did not make a mistake in coming to us to broadcast these productions".

Watch this program of the "Forum" talk-show, dedicated to the current issues of education in Niger, broadcast in early October 2020 by the radio and television partners of Studio Kalangou :