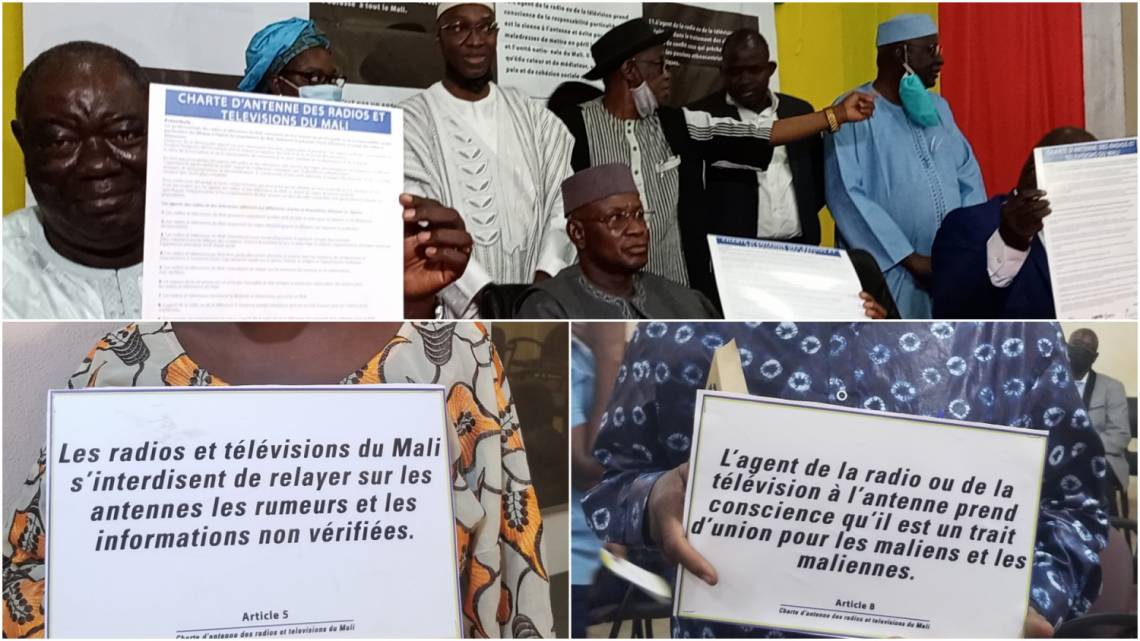 ©Studio Tamani / Fondation Hirondelle During the signing ceremony of the charter, at the Maison de la presse de Bamako, on February 13, 2021.

The ceremony for the adoption and signing of the charter took place at the Maison de la Presse under the chairmanship of Mr. Fodié Touré, President of the Haute Autorité de la Communication (HAC) with, at his side, Bandiougou Danté, President of the Maison de la Presse and the Union des Radios et Télévisions Libres du Mali (URTEL), and the National Representative of Fondation Hirondelle, Martin Faye, who has been leading Studio Tamani for 5 years.

This Charter (full text to download above) was inspired by Studio Tamani and Fondation Hirondelle. It states in its preamble: "The exercise of democracy is based on honest, responsible and pluralist information. The cardinal values on which the democratic requirement is based are the scrupulous respect of facts and the private life of individuals, the refusal of corruption and manipulation of consciences, the constant concern for independence and dignity." It then sets out 13 articles, corresponding to the commitments of the signatory radio and television stations. For example, Article 3, devoted to the fight against discrimination, states: "3. Mali's radio and television stations shall refrain from any form of exclusion and shall take minorities into account. They shall refrain from broadcasting content aimed at discriminating on the basis of race, sex, age, religion, ethnicity, disability, physical appearance or social status."

The first version of this charter was drawn up following exchanges between Studio Tamani's management and the HAC and URTEL. 50 recognized journalists from the Malian media landscape then participated in a validation day to finalize the text. All of them met on February 13th for a solemn signing ceremony. The text of the charter was read on this occasion by two journalists from Studio Tamani and distributed to all those present in the amphitheatre of the Maison de la Presse (see video below).

This Charter should contribute to make radios and television channels a social link between Malians, restore confidence within society, be a firewall against extremism, inter-community violence and the stigmatization of groups. The president of the HAC stressed at the signing ceremony that "this charter is a tool that was missing from the panoply of reference texts in the allocation of frequencies and monitoring of radios in our country".

Watch our video of the adoption ceremony of the charter on February 13, 2021 at the Maison de la presse de Bamako :