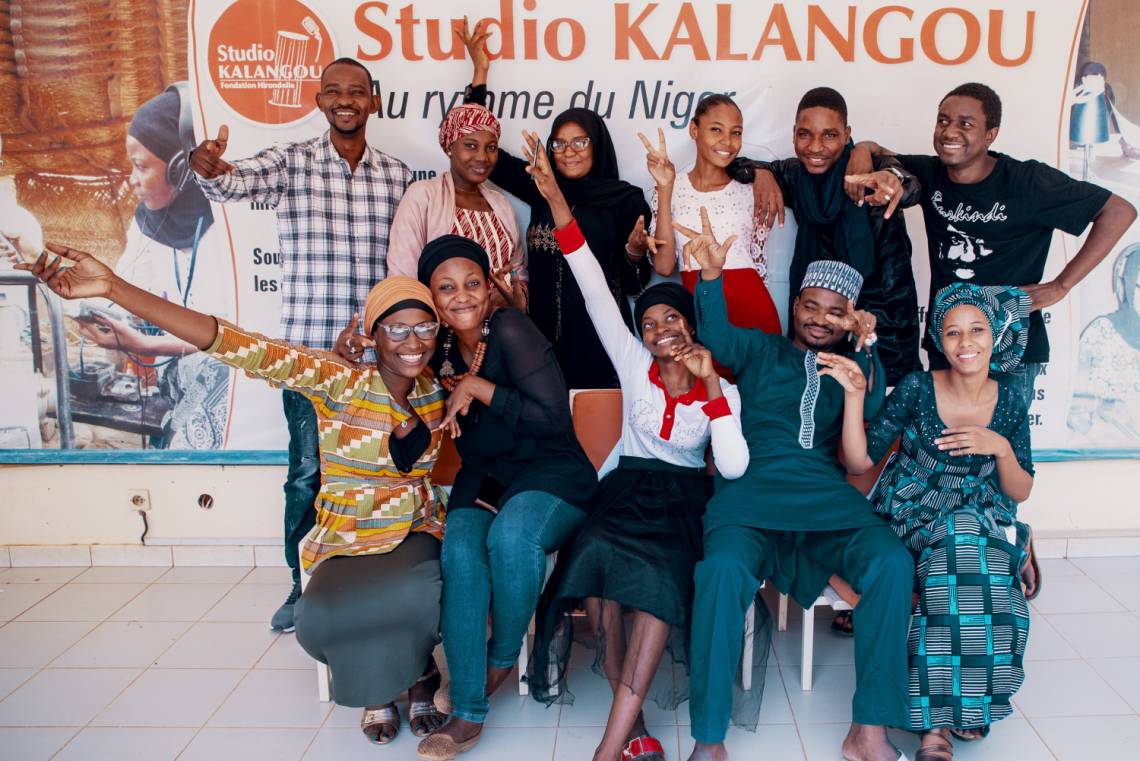 ©Ollivier Girard / Fondation Hirondelle Part of the editorial staff of Studio Kalangou in Niger, including the team in charge of the new youth programs.

Our new youth programs in Mali and Niger

Since the beginning of June, Fondation Hirondelle's programmes in Mali (Studio Tamani) and Niger (Studio Kalangou) have been broadcasting new productions every weekend for young audiences. The content includes news, sport, culture, debates, in several languages. These new programs are produced with the financial support of the Agence Française de Développement (AFD) as part of the "MédiaSahel" project implemented by CFI, the French media development agency.

Niger and Mali rank first and fourth in the ranking of countries by fertility rate (World Bank ranking). With an average of 6.76 children per woman, Niger is the country with the youngest people in the world: half of the population is under 15 years old. These are therefore countries of young people. But what place do young people occupy in it? Politically, almost none. At both national and regional levels, power is held by much older actors. At the economic level, although the focus is often on individual start-ups, in reality most young people are still entirely dependent on family income. The social situation is not much better. It is difficult to be socially recognized in societies that value age, experience and wisdom. In fact, in these youngest countries in the world, the youth are marginalized and struggle to project themselves into a better future. This reality is obviously more dramatic for young girls, who are already discriminated against as women.

What contribution can the media and the work of local journalists make to change this situation? The new programmes produced with and for young people by Studio Tamani in Mali and Studio Kalangou in Niger aim to answer this question at their level. News bulletins and magazines are now specially designed and distributed, in several national languages, with and for young people every weekend from 5pm to 7pm, by 70 radio partners in Mali and 38 across Niger.

The "youth journal", presented by two dynamic voices, addresses current issues (security, politics, society, economy, sport, culture), as closely as possible to the concerns of young people. It is followed by a 3-minute interview with a guest, testimony or expert on a specific topic. Finally, a large 40-minute magazine, entitled "Tous au grin" in Mali and "Tous à la Fada" in Niger, allows guests to interact somewhere outside the studio, on a subject related to that place (university, festival, museum, association). This magazine is co-hosted by two young journalists and animators from each programme. Listeners can ask questions live in the audience or via social networks, including WhatsApp. These new youth programmes are available online and on the messaging network, which is very popular amongst young people in Mali and Niger. The programmes are also broadcasted in Mali via telephone services, as part of a partnership with Viamo. Several million listeners can have access to it.

The launch of these new programs is part of Fondation Hirondelle's overall strategy, which has made youth and women two of its priority audiences around the world. At the beginning of the year, we launched a new programme for young people in Burkina Faso, Studio Yafa. The three programs of Fondation Hirondelle in the Sahel will thus develop their synergies to address issues that concern young people in Burkina Faso, Mali and Niger. Elsewhere on the continent, Fondation Hirondelle has also launched a new programme in Kasaï, a region in central DRC, with a strong youth component, and is currently working to launch a new United Nations youth radio station in Madagascar.