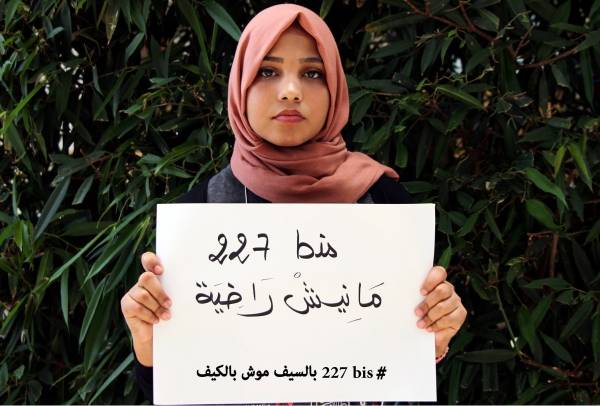 ©CREDIF The law scraps Article 227 Bis of the Penal Code, which waived charges for sexual acts with under-15s if the perpetrator agreed to marry his victim.

On July 26, Tunisia’s parliament adopted a law to fight violence against women, becoming the first Arab country to do so. This was the culmination of a long struggle by feminists, lasting more than 20 years. An article by Olfa Belhassine, correspondent in Tunis for JusticeInfo.net, Fondation Hirondelle's website devoted to justice and reconciliation processes around the world :

MPs present in parliament that evening unanimously approved the new Organic Law on Elimination of Violence against Women. The law’s adoption stirred emotions among most women MPs (72 out of a total 217), who launched cries of joy in parliament. Tunisia thus becomes the first Arab country and the 19th in the world to adopt legislation on fighting violence against women.  The new law is in application of the Constitution, whose Article 46 says that “the State must take all necessary measures to eradicate violence against women”.

According to several lawyers, this law is important firstly because it incorporates international criteria and instruments to fight violence against women. It also draws on four pillars: prevention, protection of victims, providing care and punishing perpetrators.

“This date will go down in history for Tunisian women,” declared historian Dalenda Larguèche, director general of CREDIF, a Tunisian centre for research and documentation on issues affecting women.

A special judge on violence against women

But it was a long struggle for this law to fight all forms of violence against women -- physical, sexual, psychological, economic and political. The law sanctions aggressors, aims to protect and provide reparations to victims, and gives the State responsibility to take care of them (housing, medical care, legal and psychological support). It also scraps Article 227 Bis of the Penal Code, dubbed the “Article of shame”, which provided for charges against suspected perpetrators of non-violent sexual acts with under -15s to be dropped if they married their victim. The law increases sanctions for various forms of domestic violence. It also sanctions sexual harassment in public places, the use of girls as domestic employees, and provides for sanctions against employers who deliberately discriminate against women on salaries. It say that special units should be created within the police, as well as a special judge to deal with cases of violence against women. Courts are to set up special areas to receive victims.

“The resistance in parliament was strong,” says Yosra Fraws, women’s activist and representative of the International Federation for Human Rights (FIDH) in Tunisia. “Up to the last moment, we didn’t know if the law would be passed.” Yosra Fraws is one of the experts that helped push for this law, from its drafting by Tunisian lawyers three years ago to its parliamentary committee discussion in June and adoption by parliament.

One of the issues that provoked heated debate in parliament was “violence based on gender”. Some MPs from the Islamist party Ennahda, which has a majority in parliament, argued that including provisions on this would threaten “family unity” and “legitimize homosexual marriage”. Also, it was not easy to get the age of “informed sexual consent” raised from 13 to 16. But an incident last December caused a lot of reaction in Tunisia and may have pushed MPs to raise the age of consent: a young girl was married to her rapist, who got her pregnant when she was 13. The perpetrator of the rape claimed she had consented, and she did not deny it.

Thanks to lobbying from feminists and human rights organizations, who formed a civil Coalition against violence towards women, parliamentarians were finally convinced of the need for the new law. CREDIF also put in place a media strategy to the same end, targeting the media, political parties and opinion leaders in Tunisian society.

During a conference at CREDIF on August 4, jurist and women’s activist Hafida Chekir recalled the long battle that civil society has led these past 20 years in order to get this legislation.

It started in the early 1990s.The Tunisian Association of Democratic Women (ATFD) had just been founded, and many left-wing women joined. One of the first things it started working on was violence against women, which was rife in society.

“We met a lot of resistance from the Interior Ministry and the various State structures under Ben Ali’s regime,” Hafida Chekir recalled, “especially when we tried to affix our posters in public places. The authorities kept saying: `These are isolated cases, you are exaggerating. Do not bother yourselves with this`.”

The ATFD nevertheless opened a centre for women victims of violence, in 1993 it organized a seminar on the problem and the same year produced a book, which remained censored until 2008.

“It is important to remember all these stages, so as not to forget the role played by civil society,” says Hafida Chekir.

Continuing the push for equality between men and women which is written into the Constitution, President Béji Caied Essebsi on August 13 (Women’s Day in Tunisia) launched a debate on equal inheritance rights. Despite all the progress made by Tunisian women, their inheritance rights are still only half those of men.