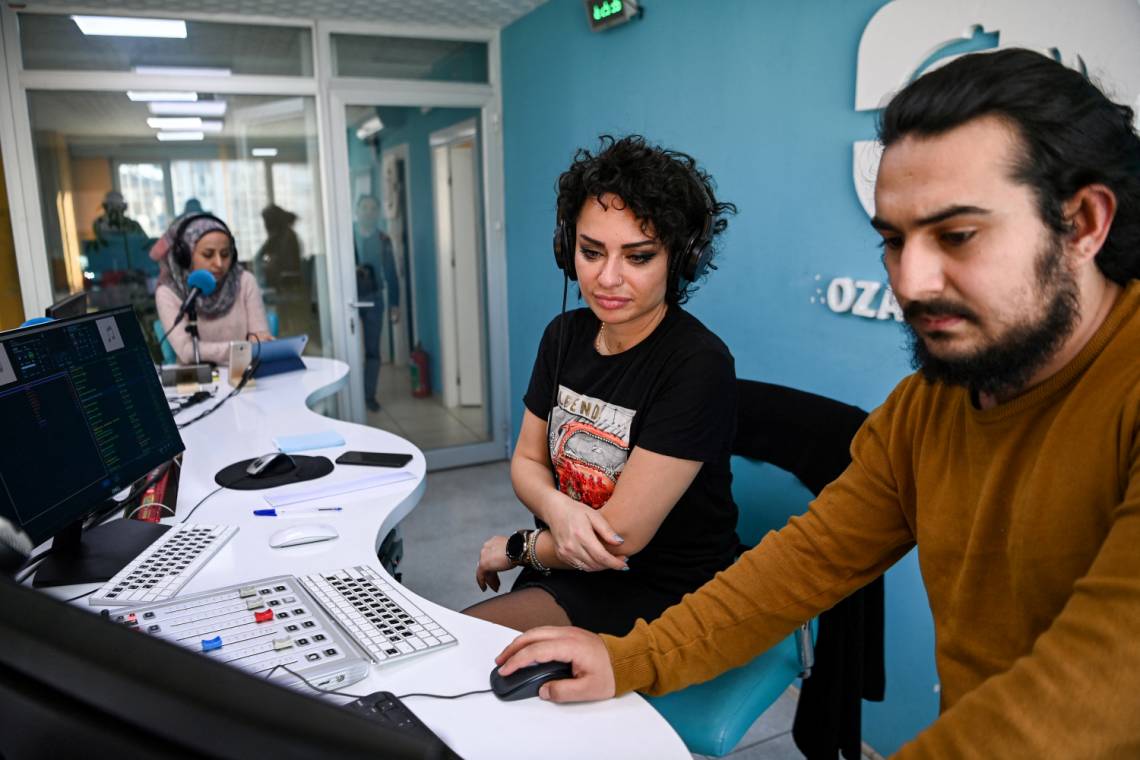 ©Ozan KOSE / AFP In the studio of Radio Rozana in Gaziantep, south-east Turkey, on 26 February 2021.

Lina Chawaf, a Syrian journalist in exile since 2011, is CEO of Radio Rozana, an independent Syrian media based in Paris. She explains the work of Syrian reporters faced with daily violence.

Why did you leave Syria in 2011?
I was then working at Arabesque, the first private and most popular FM radio station in Syria, which I had founded five years earlier. Soon after the beginning of the Syrian uprising in March 2011, the regime asked me to broadcast their propaganda. I refused, because it was all lies and hate speech. After four months, I was repeatedly threatened with arrest, killing, killing of my children, and I was told to leave the country. I was scared every day, so I escaped.
In 2012, I was contacted by other Syrian journalists who had also been forced to flee the country. In July 2013, with the help of foreign cooperation including the Danish NGO International Media Support and the French agency CFI, we launched Radio Rozana. It’s an independent media based in Paris, broadcast on the Web, providing news to Syrian people. Our values are credibility, human rights, women’s rights, acceptance of differences, with the aim of changing Syrian society and bringing democracy to the country. Today our team is composed of five people in Paris, 13 people in the Turkish city of Gaziantep close to the north-west Syrian border, around 20 correspondents inside Syria and other places where Syrian people live such as Lebanon, Jordan, Istanbul and Berlin.

For the journalists who remained in Syria, what are their possibilities to work?
It is nearly impossible for any Syrian or foreign journalist to work openly and freely in Syria today. It is too dangerous. Censorship by armed groups and other political actors is everywhere. It varies according to regions, but the greatest risk is working in regime-held areas. At Radio Rozana we all know journalists and friends, including some of our correspondents, who have been kidnapped and killed by Al Nosra, ISIS or the Syrian regime since 2011.
For that reason, we didn’t choose professional journalists as our correspondents but rather activists who publish information on social networks. They work for us in a clandestine way. For three years we were able to provide them with professional journalistic training in Gazantiep, until the Turks closed their border in 2015.

Witnesses wanted
to exaggerate
the number of casualties,
so that people
could be rescued
sooner

In such a dangerous context, how to produce reliable and accurate information?
Frankly, this is very difficult. It’s difficult to ask our correspondents, who are Syrian, to remain neutral in this conflict. Some of them have lost members of their families in terrible conditions. They have seen so much injustice over the last ten years. For instance, when the chemical attack occurred in August 2013 in the south-eastern suburb of Damascus, we were not able to report for 24 hours. Our correspondents were shocked. Some of them saw dozens of people dying in minutes: 1,600 people died that night, most of them in horrible suffering. It was so hard. In this case and many others, witnesses wanted to exaggerate the number of casualties, so that people could be rescued sooner. They were looking for international help and were disappointed. We could start reporting only after 24 hours. We had to count corpses, to speak with more sources than ever, to cross-check more information than ever, inside Syria and outside. These were the necessary requirements for credible reporting.
It’s difficult, but we keep on working because credible reporting helps reduce hate speech in Syria. And this is very necessary today because the social networks are full of propaganda and hatred. They were important channels for the peaceful spread of the Syrian uprising in 2011. But after ten years of destruction, they have become the only platform where Syrian people can shout their anger and their despair.