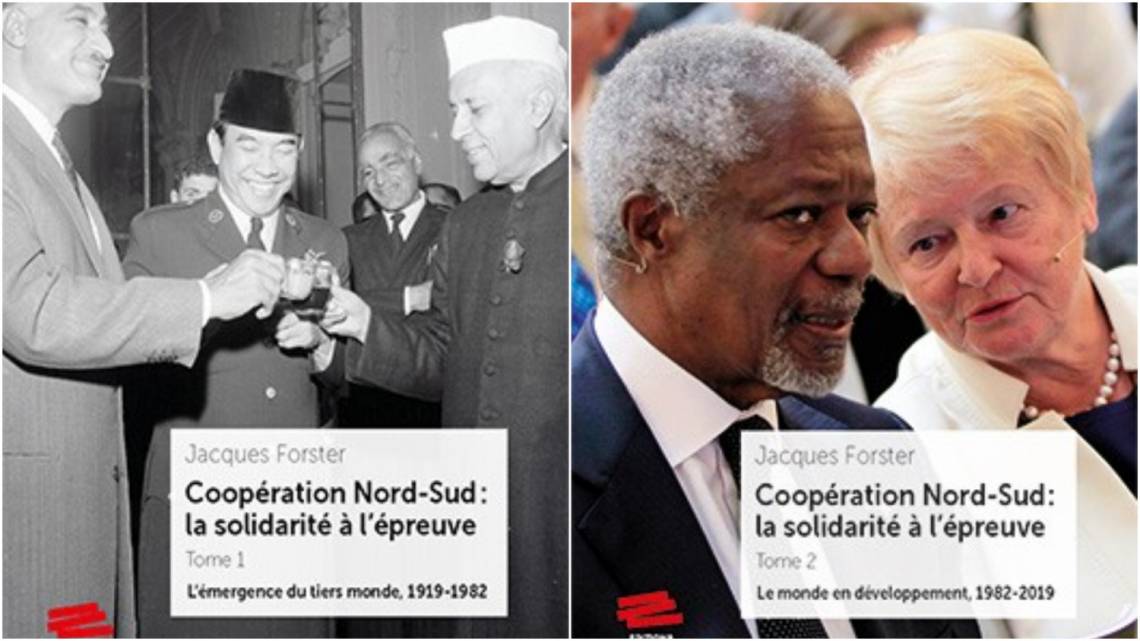 Jacques Forster is an honorary professor at the Graduate Institute of International and Development Studies in Geneva. He was vice-president of the ICRC between 1999 and 2007. He was also a member of Fondation Hirondelle's Board for several years. He has just published a book in two volumes on the history of North-South cooperation, published by Alphil. He gave us an interview on this occasion - read or listen to it below.

Through your experiences in the worlds of humanitarian aid, development and international relations, what have you learned about the role of the media, journalism and access to factual information in the most fragile contexts?
Jacques Forster: I must say that it is above all the experience of the ICRC that made me sensitive, that opened me to these issues, because it is there that I had the opportunity to get to know these so-called fragile contexts. Contexts where populations, communities, suffer from the effects of armed violence. When I became a member of the Board of the Fondation Hirondelle, I realized something I had not realized before, and that is the protective function of quality information accessible to vulnerable communities in conflict situations and situations of armed violence. One of the essential missions at the heart of the ICRC's work is precisely the protection of civilian populations, non-combatants... I realized to what extent, in the field, the quality of information is an essential element in ensuring people's safety. But also for daily needs such as access to food, here too information can be extremely important. In situations of insecurity, receiving reliable, quality, clear, regular information, which allows listeners to establish a relationship of trust with the media, with the source of this information, is an absolutely essential element. People need to know where they can go, where they can't go, what behaviors to avoid... It was really when I discovered Fondation Hirondelle that I realized how crucial, how critical, information is in this protection issue.

What do you remember from your years on the board of Fondation Hirondelle?
When I discovered Fondation Hirondelle, I found an institution with clearly stated values, values with which I could identify. An institution that also had extremely clear principles of action. The other aspect that impressed me a lot was the Foundation's ability to adapt. While remaining clear about its principles, the Foundation has a transparent framework for action and also has the capacity, because of its size and organization, to adapt to changing situations and to respond to needs that can be very diverse depending on the place and the time.

Jacques Forster, you have just published a two-volume book on the history of North-South cooperation. Fondation Hirondelle's work is part of this cooperation, within the framework of development aid policies. You have reviewed this recent history - almost a century old - of North-South cooperation. What can it teach us about the world of today, and perhaps about the world of tomorrow?
The focus of this book is to see what role North-South cooperation plays in international relations. If we take cooperation from the perspective of States, we see that development aid, and therefore both humanitarian action and development cooperation, has a dual mission.
On the one hand, it is an instrument of solidarity, therefore with an altruistic aim, but on the other hand it remains an instrument of foreign policy. There can be a tension between these two objectives, that of defending the national interests of the countries that finance the cooperation and altruistic objectives on the other hand.
What marks this North-South cooperation from the beginning is its asymmetrical character. We use terms of cooperation, for example the term « partnership», but we see that the two parties do not have the same weight in this relationship. Efforts have been made for a long time to try to rebalance this, it is a long term work. Progress has been made in terms of intentions over the last few decades, with some fine declarations, but it has yet to be implemented.
Furthermore, an interesting development is that some countries of the South are becoming aid providers themselves. Among these countries, there are some that are both recipients of aid from Western countries but at the same time have their own cooperation programs.

What role have issues related to information and its flip side, propaganda, played in the history of cooperation that you have travelled through and that you recount in these two books?
I would say that they have played a role "by default", that is to say that the agenda of development cooperation actors, especially state actors, has been influenced by major phenomena like the Cold War. We can see that there is a whole series of themes that are totally absent from the debate in development cooperation; if we take, for example, the question of human rights or the quality of governance of public affairs, these themes are simply not mentioned. Because the objective, for the main actors, was basically to ensure that the countries receiving aid behave in a certain way in their international relations.

Today, issues related to information, or rather disinformation, and the infamous "fake news", are a major global problem, including in international relations and at the diplomatic level. How do these issues of disinformation, and of the response to disinformation, weigh on the stakes of cooperation today? Is their impact on international relations stronger today than in the past?
It is stronger precisely because of the tools that are at the service of disinformation. If we take social networks and new communication technologies, there are really two sides to it: on the one hand, there are extraordinary opportunities to disseminate information and, on the other hand, to disseminate disinformation.
But it is a problem that goes beyond North-South cooperation, that affects all societies, and I believe that we are sadly experiencing it here, for example in the context of the pandemic that has hit us. It is a problem that is absolutely global. There are problems that are perhaps more serious in the South, particularly with regard to the management of the pandemic, but in terms of misinformation I believe that we are all equal when faced with these phenomena.