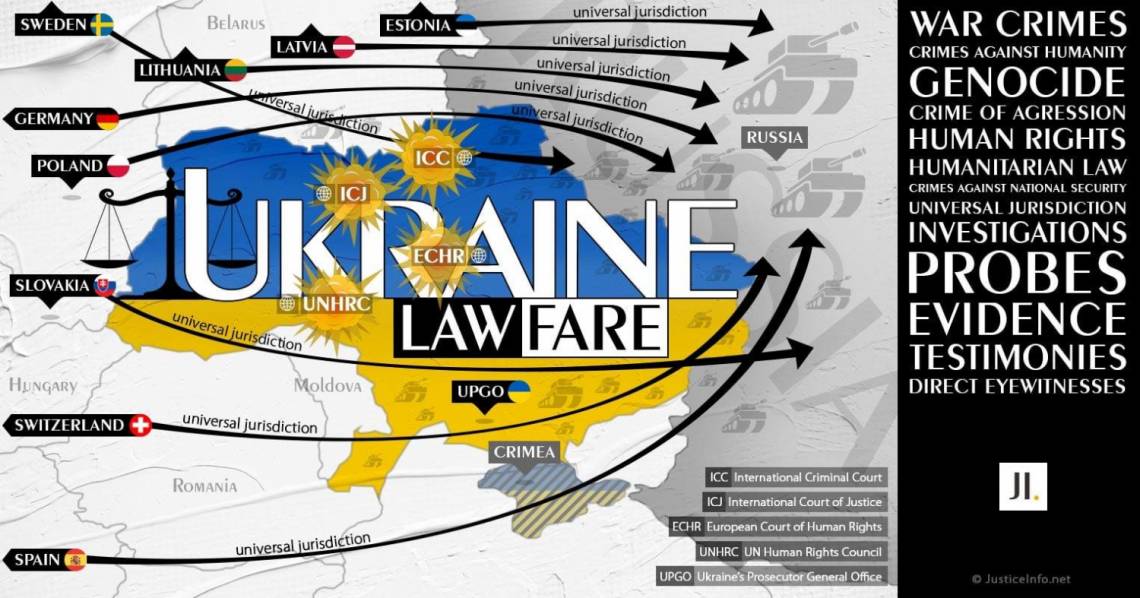 ©Credits: JusticeInfo.net The battle of the law at a glance.

"International Justice is a pillar of the defense strategy of Ukraine"

Since the beginning of the war in Ukraine, our media JusticeInfo.net has mobilized to cover the impact of this conflict on Law and International Justice. Thierry Cruvellier, Editor in chief of Justice Info, discusses these issues that are at the heart of Ukraine’s defense strategy.

What impact has the war in Ukraine had on international justice?

Until last month, the feeling was that war and dictatorship were still important in the field of International Justice, but no longer the primary focus. Other fields were growing in importance, such as environmental justice, colonial crimes, violence against indigenous communities... These major issues remain. But Ukraine is now at the center of everything.

What crime has international justice dealt with in the case of Ukraine?

In this case, it is first of all a crime of aggression, that is to say that one country attacks another. In international law, this is the ultimate crime that leads to all others. It is not yet clear before which jurisdiction it will be dealt with. But since Nuremberg - where it was called a "crime against peace" and was at the center of the trials - the crime of aggression has not prevailed, with the exception of the Iraqi invasion of Kuwait in 1990. This situation explains the extreme dynamism, determination and speed with which we see a significant part of the UN States mobilizing on this case.

How did the editorial staff of Justice Info react to the outbreak of war in Ukraine?

When the war started, I thought that we would be in a difficult situation where Ukraine would absorb the world's attention and Justice Info would not have much work to do, because justice always comes later. The opposite happened: justice immediately became a central theme.

This completely changed our agenda. All of a sudden, all the jurisdictions of the world were seized, while at the same time it is difficult to really understand the role, the field of competence, or the crimes dealt with by each of these bodies. So there is an essential work of explanation and analysis of these judicial initiatives and the political strategies behind them. We have mobilized our expert journalists, in The Hague in particular, while opening our "op-ed" pages to external contributors in order to shed light on every aspect of this "weapon of law", since the offensive is multiform and unprecedented. Each week there were practically two major legal events to cover: Ukraine referring the case to the International Court of Justice (ICJ) and the European Court of Human Rights (ECHR) two days after the start of the Russian attack; the historic referral of states to the International Criminal Court (ICC), the opening of an investigation by the prosecutor of this court, states announcing national investigations one by one, etc. 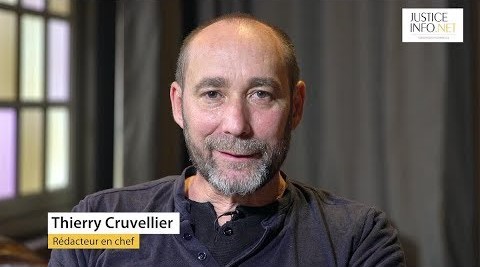 What is the role of a site like JusticeInfo.net and the work of your journalists on such a complex and evolving issue?

We have to make sure that we systematically explain and describe every form that justice is taking. We are addressing each as the news comes in, whatever is most pressing. The ICJ and the ICC have been quite central, but we have also begun to shed light on national procedures and to anticipate emerging debates.

We must also continue to carry out analysis. We have to go into the details of decisions to identify their meaning, their limits and their political dimension. One thing struck me in the coverage of the ICJ decision when it ordered Russia to stop its attacks. Who went to read the separate or dissenting opinions of the judges? And who are these judges? This is an important job.

It is not just a matter of reporting the court's press release and proclaiming that the ICJ is asking Russia to stop the fighting, but of knowing what the Chinese, Russian, French or Moroccan judges have said. That is, to question how we should understand international justice in its political as well as legal dimensions. We see that the sensitivities, the political history of the judges weigh in their reasoning and in their decisions. We have to tell this story, to go beyond symbolic or moral statements, and to avoid a kind of media simplification of what happens at the level of justice and the way it works.

Our job is to anticipate all the aspects of this justice, to try as quickly as possible to shed light on them, to find experts who know how to tell or explain it, or to cover it ourselves. We must be very dynamic, reactive and think about the grey areas or future developments. But we must not forget the rest of the world and keep a balance with the urgency of Ukraine.

What is Justice Info's relationship with Ukraine, its journalists and media, and what are your ideas for the future?

As it happens, Franck Petit, the deputy editor, and I worked in Ukraine in 2018-2019. We trained local journalists in covering international justice and ordinary justice, along with international crimes. We are in direct contact with fellow journalists and some of those we worked with.

We are working to support these Ukrainian journalists and to resume work with them on the field of justice. That is to say, to produce, or to assist in the production of reports related to the war crimes that are taking place, but also to the justice efforts that are underway there, particularly regarding the documentation of crimes.

The urgency at this point is not the holding of trials but the collection of evidence, which may be used in court. Journalists hold key roles, they are witnesses. We hope to soon see how to concretely use Justiceinfo.net so that our platform is as much at the service of local journalists as of our readership, by highlighting reporting from Ukraine, while also finding ways to support them in their work covering justice and international law.