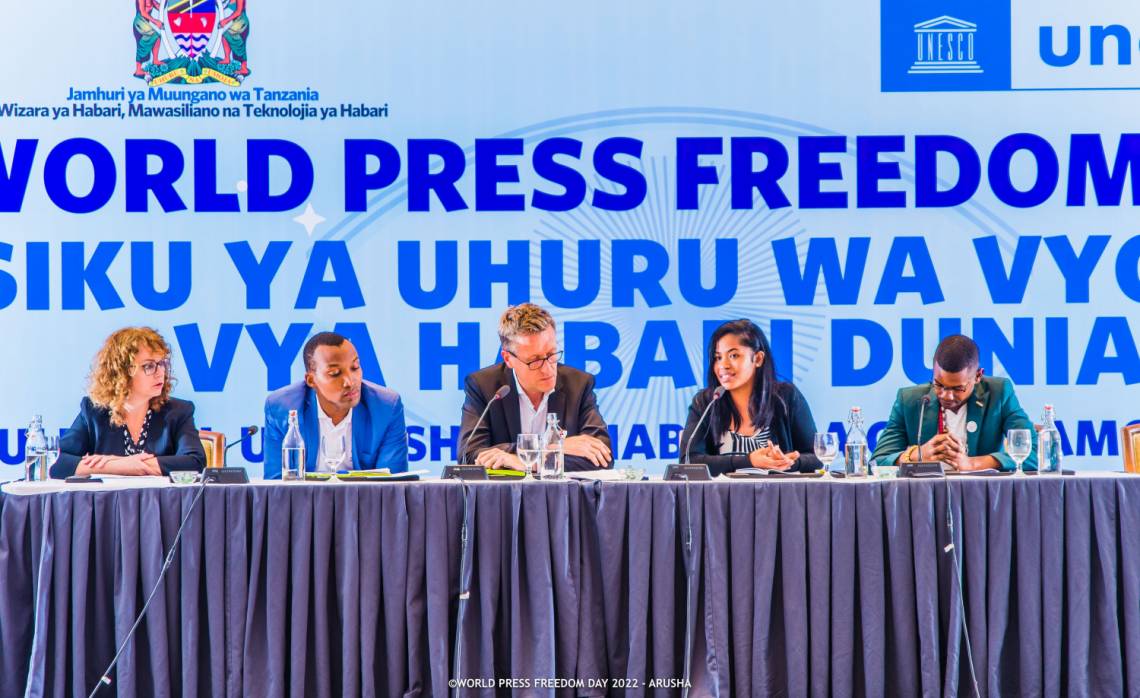 ©World Press Freedom Day - Arusha Our panel at the Africa Media Convention on 2 May in Arusha.

A look back at World Press Freedom Day in our media

« Journalism under digital siege » is an additional challenge for the media today, but also the theme chosen by UNESCO for World Press Freedom Day in 2022. This article is an overview of the actions and productions of Fondation Hirondelle's media made for this occasion.

To discuss press freedom, which was honoured on 3 May on the occasion of World Press Freedom Day, Studio Kalangou in Niger convened a press conference. The aim was to explain the Journalism Trust Initiative (JTI) certification awarded by Reporter sans Frontières. Studio Kalangou is the first media outlet in Africa to be awarded JTI certification on 13 April. The press conference, which brought together several media outlets in Niamey, was also intended to show gratitude to the regular guests of Kalangou's programmes for their loyalty.

The evening info flash reported on the meeting with the press during which several reactions were collected on both the certification and the press freedom situation in Niger.

A debate was also organised by Studio Kalangou. The debate was about the current situation in Niger, especially about the recognition of the status of journalist for bloggers and online media.

In the Central African Republic, Radio Ndeke Luka (RNL) took the opportunity of this special celebration to take stock of the profession. Our team in Bangui spoke to Vincent Namrona, general rapporteur of the High Council for Communication. For him, the observation is clear: "The profession of journalist does not allow one to make a living", on a salary level. The resulting abuses would be the consequence.

Radio Ndeke Luka also took stock of the situation based on the ranking established by Reporter Sans Frontières. The CAR has improved by 25 points, although the situation remains problematic according to Reporter sans Frontières and journalists are demanding better working conditions.

In Mali, Studio Tamani addressed the subject of this world day by questioning the current situation in the country. Firstly, with an article about the journalists who have disappeared, been kidnapped or are being held hostage (Hamadoun Nialibouly, Olivier Dubois, Moussa M'Bana Dicko and Birama Touré).

As an extension of this day, the spirit of which inspires a Grand Dialogue, the editorial team's debate programme, should also address the subject of press freedom in the coming days.

Studio Sifaka, in Madagascar, also draws a lesson from the ranking published Tuesday by RSF. The article points out that even though the Minister of Communication and Culture has welcomed the situation and the fact that no journalist has been imprisoned, the country's press freedom record is still impressive. The Big Island has seen an impressive drop of 41 places. However, the situation is clouded by the economic indicator, which reminds us of the precariousness of the profession and its risks.

As the theme of this day is related to digital, another article discusses how traditional media are appropriating the new modern tools of production and dissemination, which are taking an increasing place in the Malagasy media universe.

In Burkina Faso, Studio Yafa will devote a special edition to this theme, albeit delayed until Friday 6 May. The "D-day" was nevertheless greeted by a production of Studio Yafa, whose editor-in-chief was invited by UNESCO - together with the Hirondelle Foundation - to its international conference on press freedom in Tanzania (Arusha 2-5 May).