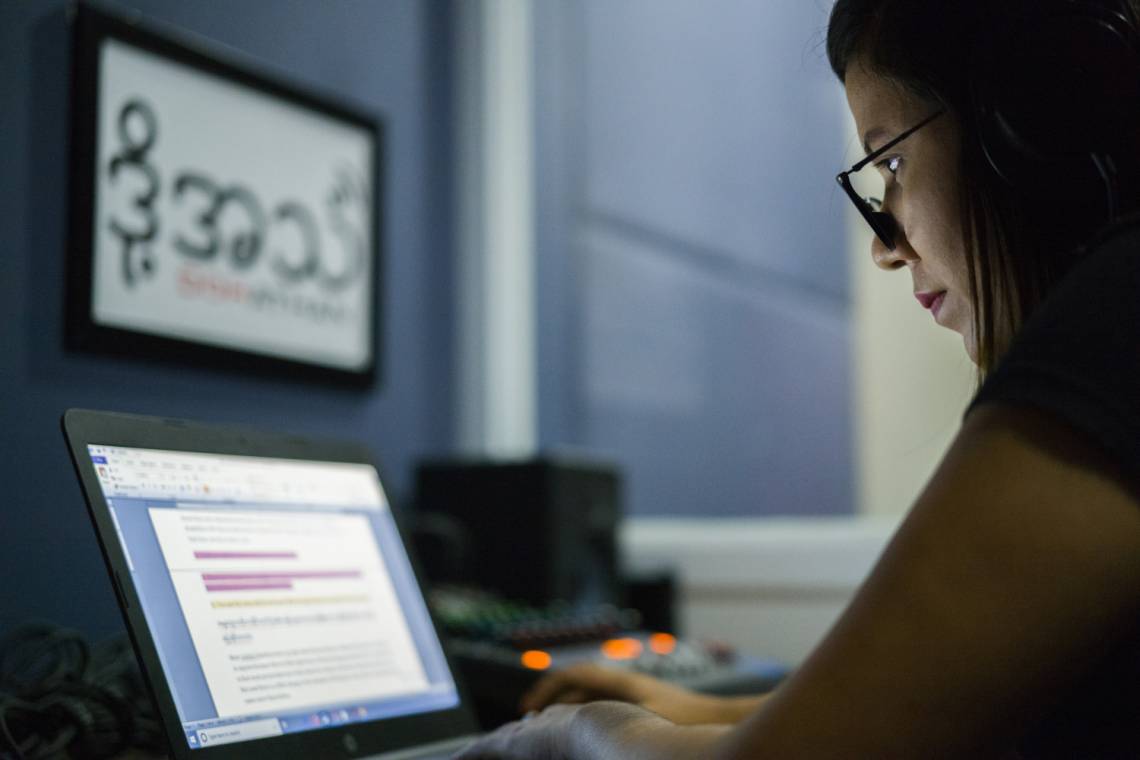 Doh Athan : A podcast that continues, even in exile

Since 2017, Fondation Hirondelle has been producing a human rights podcast in partnership with Frontier Myanmar, a Burmese online news magazine. Despite a tense situation following the coup d'état on 1 February 2021 in Myanmar, production of the podcast was able to continue, but for safety reasons the team had to leave the country and now operates from Thailand.

Doh Athan, "Our Voice", is a weekly 10-minute podcast with videos and articles for the web and social networks, that covers human rights issues in Myanmar. It is produced by the team of Frontier Myanmar, an online news magazine, as well as through partnerships with local reporters and media from different states, regions and ethnicities. The programme is broadcast online via social networks, as well as on Voice of America radio.

The political situation remained particularly tense following the coup d'état on 1 February 2021. The coup increased violence in the country but also led to a significant decline in press freedom and freedom of expression. Many journalists have been arrested and imprisoned, while others are in hiding.. Media outlets have been forced to close. Others have fled to Thailand and are now working from the other side of the border. This is the case of Frontier Myanmar, an independent media partner of Fondation Hirondelle. The military arrested two of its reporters at different times of the year, leading to temporary suspensions of publishing.

Fondation Hirondelle, in agreement with its two financial partners for this project, the Swiss Cooperation and the United Nations Development Programme (UNDP), helped Frontier Myanmar to set up in Chiang Mai (Thailand) and to support the material and editorial transition. Despite these events and some slowdowns in its activities, Frontier continued to produce and broadcast the Doh Athan podcast, articles and videos, while remaining mindful of the safety of journalists. The team have covered issues linked to a range of human rights topics, including access to justice, displaced people, women, LGBTQI people, labor rights and access to health and education..

Here some recent episodes of the Doh Athan podcast:

Health care out of reach

Doctors say a feared fourth wave of COVID-19 may not be as bad as expected, but the weakening of the currency caused by the country's political turmoil means that health care is out of reach for much of the population.

This week, a mother was reportedly raped and killed during a military raid on a village in Magway Division. In this conflict-torn area, the elderly, women and children are suffering the effects of war.

Getting timely blood transfusions for treatment has become increasingly difficult in Myanmar's deteriorating health system. Public hospitals have also been accused of selling blood to patients.

Episode 231 - Karen under heavy artillery fire during the conflict

Amidst the ongoing conflict in Karen State, the Myanmar army has been accused of firing heavy artillery at civilians and killing villagers.