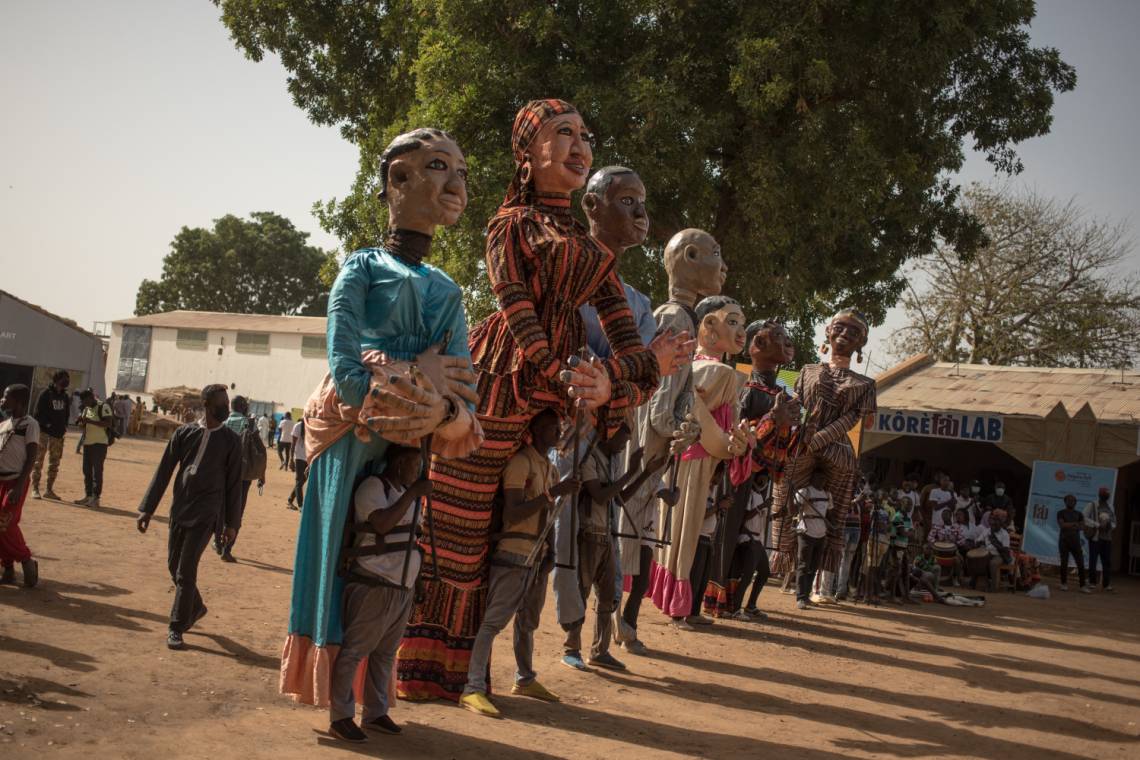 ©Florent Vergnes / Fondation Hirondelle The giant puppets came out during a report on Februrary 4, 2022 at the Segou festival, which aims to promote the artistic and cultural expressions of Mali.

19 October 2022
Headlines from our media

Studio Tamani has renewed its daily radio programme since the beginning of October. What are the changes?

Mouhamadou Touré: Studio Tamani had kept the same programme schedule since its creation in 2013. In order to better satisfy the Malian population and to strengthen the proximity through all the voices of Mali, we decided to renew this grid, taking into account the evolution of the Malian context and also the lessons of the audience studies at our disposal, in particular the one carried out by the Kantar Institute at the end of 2020. What changes in our new programme are new daily thematic magazines, dealing with governance, health and the economy. There will also be 'Zoom on', 'On en parle', 'Le dossier de la semaine' and 'Vérifions', a weekly fact-checking chronicle. We used to do this on the website www.studiotamani.org, but rarely in the radio programme. From now on, we will broadcast this weekly fact-checking magazine on our 85 partner radio stations, to reach the population directly and in particular our 3 million regular listeners. In a second phase, in the first quarter of 2023, we will also launch a press review and a major weekly sports and cultural programme. These programmes require additional resources, in terms of human resources and training, which we do not have this year.

Alongside these new programmes, we are keeping the magazines that are very popular with our audience, such as "Tous les enfants du Mali", "Toutes les femmes du Mali" and the magazine "Parlons de l'environnement". Our news bulletins in five languages remain at the heart of our programme, each morning and evening, as does our daily debate programme "Le Grand Dialogue", which is broadcast every evening, and of which we now broadcast the best excerpts in the next day's morning show. Finally, the launch of these new programmes is accompanied by a new musical package, with new jinbgles, which highlights all the main Malian musical instruments, emblematic of the different regions of the country.

What is the challenge launching new radio programmes, with all that this implies in terms of preparation at the editorial level, internal discussions, but also at the practical level, in terms of human resources and training?

It was indeed a challenge for us because we had to continue to produce the two editions, the morning and the evening ones, and at the same time work on the preparation of the schedule, train the various journalists and technicians who were to work on the new programmes. Taking the time to do this was complicated, knowing that until now we have not had all the necessary human resources. The production of the new musical package required the services of a Swiss musician and specialist producer, Vincent Zanetti, who was able to work remotely with Malian musicians. We had to postpone the launch of these programmes a few times this year, as we wanted to offer the most accomplished content possible to satisfy our listeners.

Have you already had some feedback from the public on these new programmes since their launch?

Yes, we have received calls from listeners congratulating us on our new magazines, especially "Zoom on", the first issue of which was about the start of the school year. Also on the musical packaging: whether it's the technicians, the journalists here, and when passing through the streets, we see people who are listening to Studio Tamani's programmes and dancing to our music and our jingles. Correspondents have also called me to say that many people in the regions are already enjoying what they hear. We will wait another month before we can make a more detailed assessment.