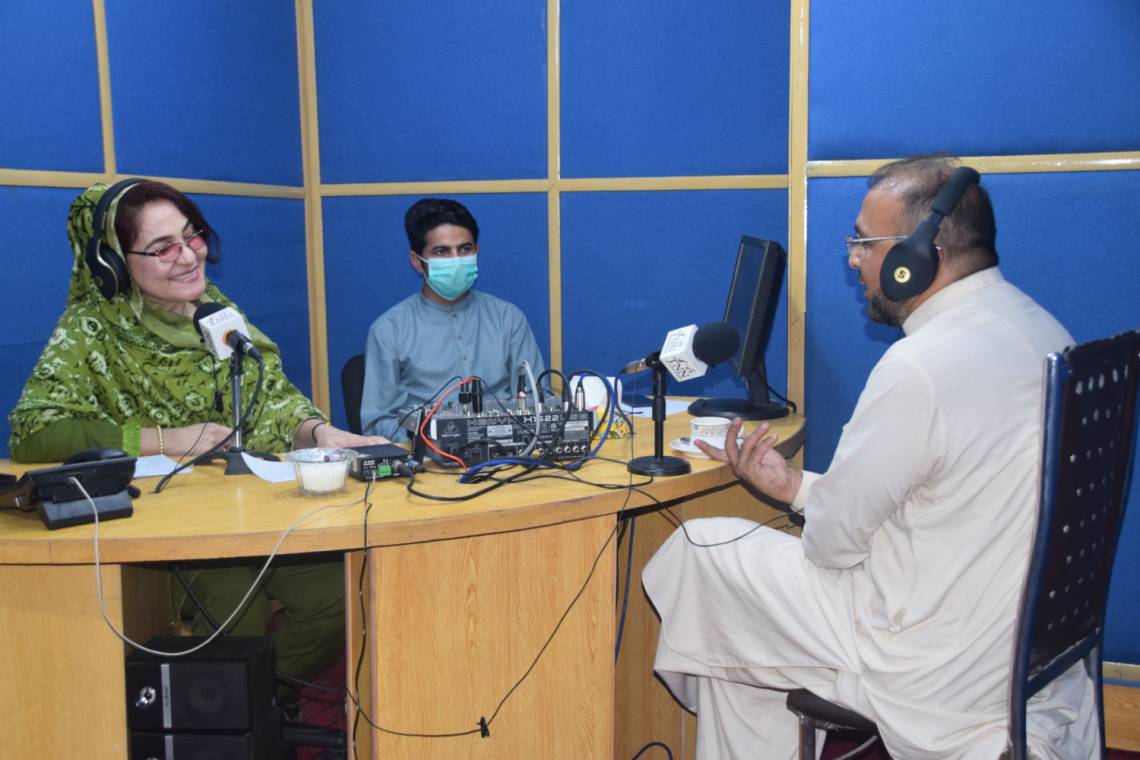 ©Tribal News Network In the TNN studio in Peshawar, during an episode of the 50-minute weekly program on the COVID-19 pandemic, produced with the support of Fondation Hirondelle.

As part of its response to the COVID-19 pandemic, Fondation Hirondelle supported the Tribal News Network (TNN) media group in northwest Pakistan during the second half of 2020. This support enabled TNN to organize training for its network of journalists and correspondents and to produce and broadcast reliable programs and information on its network of 6 partner radio stations and its website.

“The information crisis and information gap have increased in the North-West region of Pakistan with the Corona pandemic,” explains Said Nazir, Executive Director and co-founder of TNN. “It has affected the local media, faced with a lack of resources. It also directly affected the journalists, who sometimes become themselves vehicles of disinformation, because they lack basic skills, they don’t know how to verify the news. Thanks to our program with Fondation Hirondelle, they are now more able to do their jobs”.

This program, funded by the Swiss Cooperation (SDC), enabled TNN to implement a series of ambitious activities between August and December 2020, in a fragile and highly insecure context. The activities included: mentoring and coaching of young TNN journalists by 4 "senior" journalists; production and broadcasting of reports and news related to the pandemic and its multiple effects; broadcasting of a weekly 50-minute radio program on 6 local radio stations, with interviews, reports case studies, panel discussions and “vox-pop”; psychological support sessions for TNN reporters and correspondents…

Six training workshops were also organized for 30 TNN reporters and 30 journalists from other independent media; The trainees produced and published 3 stories each on their respective outlets under the supervision of experienced mentors. The stories were exclusives covering different impacts of pandemics on society with solution-focused content.

“The three-month fellowship and training program enhanced the capacity of TNN news staff, sixty journalists from TNN and other media on how to produce relevant, interesting, and reliable news with a solution element in times of pandemic like Covid-19, describes Said Nazir. It will have a far lasting impact on journalism in the region in years to come. The good thing about the project was that first the expert and experienced trainers of Fondation Hirondelle supported the staff at TNN on topics like reporting on crises, verification of fake news, constructive journalism, and safety of journalists which then they transferred to the 60 participants of the fellowship”.

This support has enabled the beneficiary journalists and media to improve their capacity to identify and process reliable information on the pandemic and its various effects on the population of North-West Pakistan. This region bordering Afghanistan is weakened by conflicts and poor governance. Lack of education, lack of trust in the authorities and strong superstitions in this environment have contributed to the spread of the pandemic among communities, and to a spread of rumors and misinformation.

"Our project with Fondation Hirondelle has been very effective in helping us produce content that reaches people,” said Said Nazir, “Information that helps them have a more accurate, factual perception of the pandemic and its reality. There are a lot of people here who think that it's a Western conspiracy, that the virus doesn't exist, but COVID is here and it heavily affects our region.”

Public audiences and reactions to the programs broadcast by TNN and its partners have been numerous and positive. Some of the topics covered have generated significant media coverage. For example, one of the young journalists trained did a story on the donation of masks that replaced money donations in traditional wedding ceremonies. This story (watch it below) was broadcast by the BBC in its channel in Pashto, the main local language. It was seen by more than 532'000 people on the BBC Facebook page. Other local TV channels then rebroadcast it.