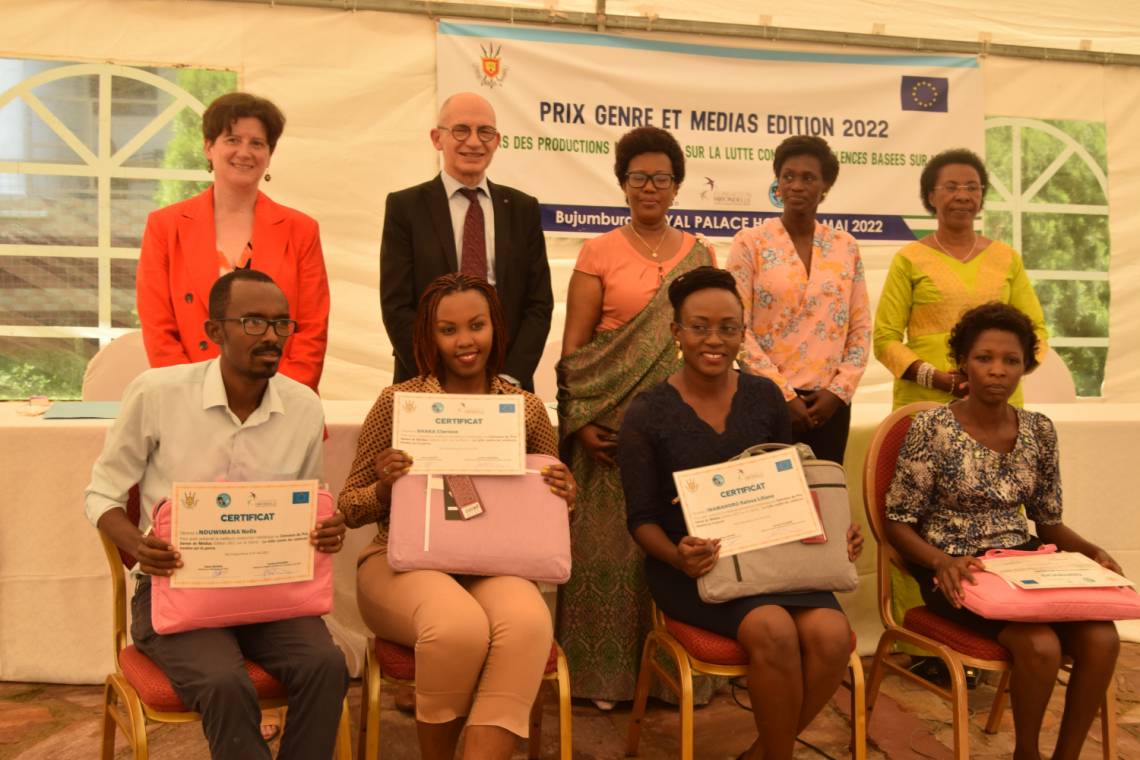 The Association of Women Journalists in Burundi (AFJO) and several partners, including Fondation Hirondelle, have set up the Gender and Media Prize, which rewards the work of five journalists on gender-based violence. Our director Caroline Vuillemin was in Bujumbura in mid-May for the award ceremony.

The objective of the Gender and Media Award is to highlight journalistic work that deals with gender-based violence in Burundi. For this competition, a jury mandated by the Association of Women Journalists in Burundi selected 5 media productions out of the 47 contributions received. Different information vectors (radio, television, written press and online press) constituted the categories of this prize. The competition is part of the project "Strengthening Burundian media to support democratisation processes, reconciliation and the rule of law". The project partners are the European Union, the Burundian Ministry of Communication, Information Technology and Media (MiniCOTIM), the Dutch organisation La Benevolencija and the Hirondelle Foundation.

Nolis Nduwimana from Radio Culture won in the radio magazine category. In the radio reportage category, Elisabeth Nsengiyumva from Radio Izere FM won the jury's vote. The prize for the TV magazine was won by Raïssa Liliane Inamahoro, who works at Radio TV Isanganiro.
Clarisse Shaka, a journalist from Iwacu, won in the print press category. On the web, it was the article by journalist Pacifique Bukuru of the media outlet Jimbere that stood out.

Our director Caroline Vuillemin was a member of the jury. She was also present at the award ceremony on 10 May in Bujumbura.

What was the role of Fondation Hirondelle in this project?

Initially, our role was more financial through the organisation of the prize, supporting the AFJO. The costs were mainly in the purchase of the prizes (laptops were distributed to the winners) as well as in the financing of the ceremony. Funds we received from the European Union. The second role was to take part in the jury.

What is the expected impact of this project on the Burundian media landscape?

The objective was that gender-based violence should be taken more into account in the newsrooms, more systematically dealt with by journalists and not only around the international day against violence against women. The aim is to focus attention on this phenomenon, which is diverse in its implications and the experiences of victims, but which is common and almost daily in many respects. This subject should not be a taboo. It should be included in drafting sessions and regularly discussed.

What are the issues surrounding gender-based violence in Burundi?

What the media can do is to raise awareness and propose answers. It is not our role to change the law, take care of victims or modify customary law. But the media, in its social role, explains the issues, highlights them and provides solutions. Being able to do this work as close as possible to the populations and in their languages are essential elements. It is also a way of supporting women who are victims.

What is the future of this prize, will it become a regular event in Burundi?

During the award ceremony, it was announced that the prize will be awarded in 2023. The theme this time will be women in rural areas and their importance in development. We at Fondation Hirondelle do not yet know whether we will be partners in this next edition.

What were the reactions of the winners to this recognition of their work?

It turns out that two laureates also won another award in the same period. Clarisse Shaka won on 3 May. Nolis Nduwimana was also awarded in Brazzaville in February. Two months later, he won another award. What is positive is that different juries, using criteria that appeal to professionalism but are not necessarily identical, are recognising the work of these journalists. This is very encouraging for the Burundian sector and around the revival that is taking place in the country at the media level.