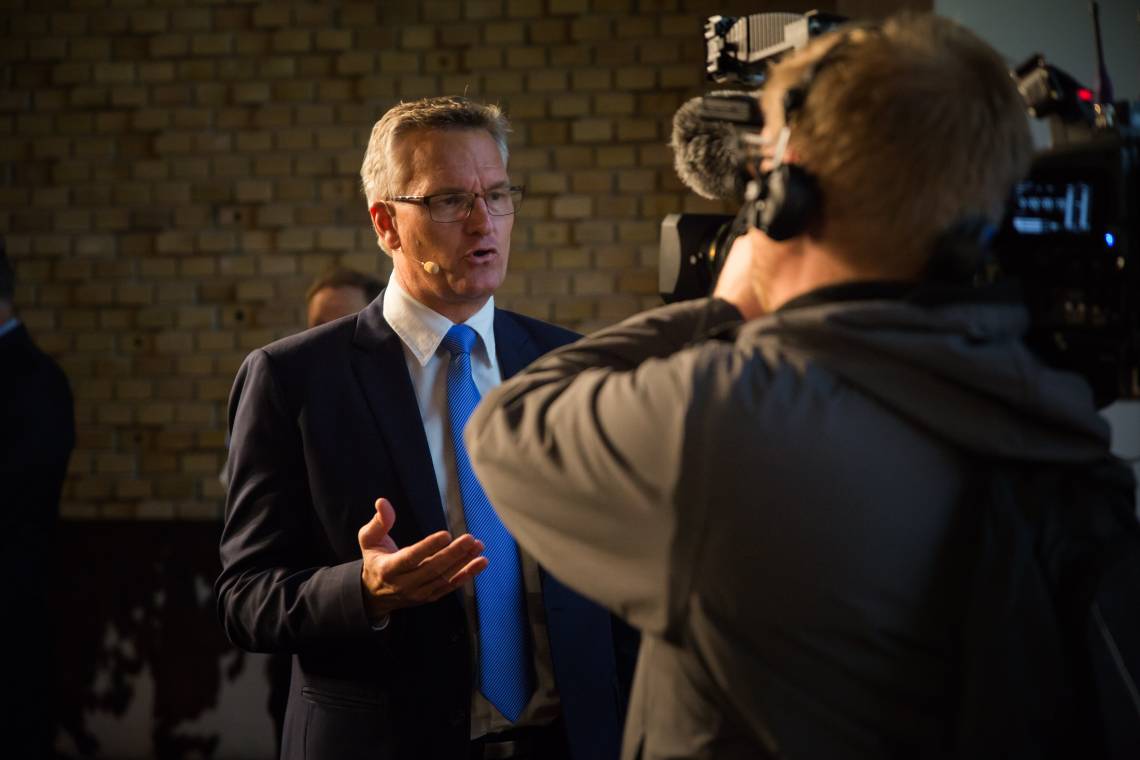 A call for “constructive journalism”: our interview with Ulrik Haagerup

For the first issue of “Mediation”, Fondation Hirondelle’s new biannual publication, we discussed about the social role of journalism with Ulrike Haagerup, former Executive Director of News at the Danish Public Television, and founder of the "Constructive Institute".

In September 2017, you founded the Constructive Institute in Aarhus (Denmark), an organization that lies at the heart of the “constructive journalism movement”. How would you define "constructive journalism"? To what kind of problems is it an answer?
Ulrik Haagerup: Constructive journalism is a corrective to the mainstream culture of media, that is used to telling stories on how things are going bad, stories that will generate clicks, stories that will win prizes and acknowledgement by other journalists. “If it bleeds, it leads” is a famous saying in US newsrooms. Over the last decades, the media have mainly focused on conflicts and crises, and to some extent thriven on their coverage. As there are “war entrepreneurs” who start conflicts and have more economic interest to make them last than to win them, there may also be a “war journalism” that permanently meets a public demand of impressing news and can easily be marketed. When I was Executive director of News at the Danish public television (Danish Broadcasting Corporation or DR), I used to speak with many different people, who were all asking me something like: “why do you give so negative an image of the world?” I was first surprised, because we did not intend do so, and then I began to scan DR news. Indeed, what I saw was mainly train accidents, murders, weather catastrophes … We were used to sending crews to cover conflicts in Africa for instance, but hardly to cover various aspects of the fast-improving living standard on the continent. Our stories were exact, but put together they were depressing. And if most media behave so, that creates a growing gap between the reality and its perception by their audience. Even if in many ways the world is going better (average life expectancy has never been so high, fewer and fewer people die in conflicts, etc.), at last people don’t want to follow news any more. They feel that the world is falling apart, that they should read something more comforting in social networks, and that a good solution may be war. This situation is a tragedy for democracy.

The title of your book, "Constructive News: How to Save the Media and Democracy with Journalism of Tomorrow" (Aarhus University Press, 2017), is ambitious. How can “constructive news” save democracy?
When I was a young journalist three decades ago, reading frequently the media was considered as a mark of civilization. Now the people distrust the media and the institutions at large: according to the last Edelman Trust Barometer 2018 (see page 3-4), only 43% of people worldwide trust the media, and if we look in details this figure is still lower in main democracies: 42% in the US and Germany, 33% in France, 32% in UK and in Japan, 31% in Australia … Only 43% of people worldwide also trust their government, while trust in business (52%) and NGOs (53%) is a bit higher. When such a high degree of distrust towards democratic institutions is reached, people are ready for populism, as Donald Trump election or Brexit vote has shown. Well, journalists cannot change the institutions but they can change themselves. Now it’s time to listen to people a bit louder and to foster trust, for instance by covering at last how the problems we used to cover can be solved. Constructive journalism intends to do so. We want to combat trivialisation and degradation of journalism, by emphasizing reporting that is more accurate, balanced and solution-focused. We want to concentrate on tomorrow and to inspire society, which is only possible if we manage to introduce a feedback mechanism with society.

Could you give some examples? Which media actions have you already undertaken through the Constructive Institute?
Let’s mention two of them. First, while distrust of politicians and media is also high in Denmark, we’ve organized long discussions between leaders of political parties represented in the Danish Parliament and editors of the Danish media. So far, both categories of actors have expressed frustration: the politicians, to have access to media not when they argue their proposals but only when they are polemical; the media, to face mostly communication speeches with little political substance. Now, how do we get out of this situation? We decided to conduct public meetings together, in order to find ways to improve media coverage of political life in Denmark. A second action focuses on post-conflict media coverage: after covering conflicts, how do we maintain media attention on recovering societies, processes of peace making, building security, improving healthcare …? This action is led by our International office in Geneva.

Isn't there a risk that "constructive journalism” in crisis contexts would tend to minor "bad" news that are still part of the reality their audiences are facing?
Constructive journalism is not about giving “good” news: once again, accuracy is one of our key principles. Besides, we are absolutely aware that – to mention a few ones - climate change, the collapse of biodiversity, terrorist attacks worldwide are major problems the world is currently facing. We just wonder: much media echo is already given to terrorist attacks, if we give still more won’t it contribute to feed the feeling of fear terrorists precisely want to spread in the society? That’s the kind of situation we try to assess.

In your opinion, what is today the main responsibility of a journalist?
In a recent article entitled “A mission for journalism in a time of crisis”, Katharine Viner, chief editor of British daily The Guardian, calls the media to “develop ideas that help improve the world, not just critique it”, and “to use clarity and imagination to build hope”. These principles, accuracy and search for solutions, are good ones. Based on them, it’s possible, like The Guardian and other innovative European media do, to publish long investigative stories that are read until the end by a large audience interested in reading a full article, not only in clicking a title. This way of publishing is good for business. It’s good for journalism. And it’s good for democracy.