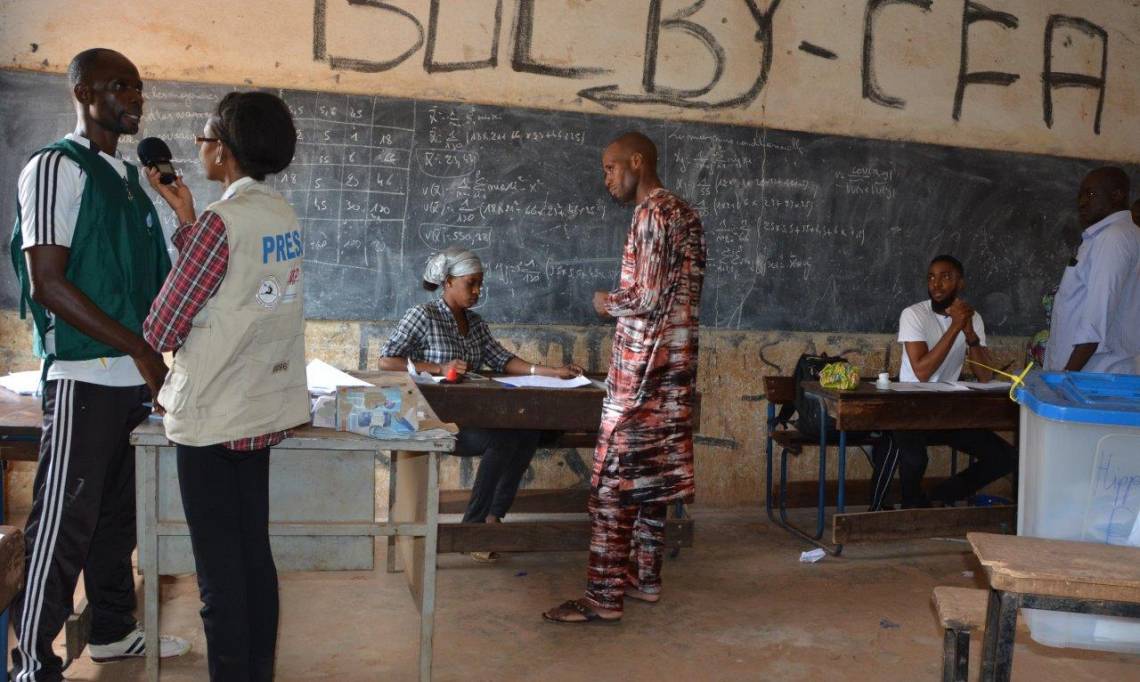 ©Mamadou Ouattara / Fondation Hirondelle A journalist from Studio Tamani reporting on a polling station in Bamako during the first round of the presidential election in Mali on July 29, 2018.

Studio Tamani, Fondation Hirondelle's news program in Mali, in partnership with URTEL (Union of Free Radios and Televisions of Mali) has set up a special mechanism to cover the recent presidential elections. Martin Faye, who runs Studio Tamani in Bamako, explains.

"The days of July 29 and August 12, 2018, voting days for the presidential election in Mali, will remain forever in the collective memory of the agents of Studio Tamani. For this major event in the life of the country, Studio Tamani has exceptionally broadcast non-stop from 8 am to 7 p.m. 50 correspondents and reporters were deployed in Bamako and in the regions to describe the voting process, live from the polling centers.

During the first round on July 29, the monitoring carried out by our Partnerships Department, confirmed by the count made by URTEL regional coordinators, reported 202 radio stations broadcasting the Special Election Program: 70 official partner radios and 132 non-partner radio stations. This figure increased on August 12 during the coverage of the second round, with 212 radios in total at that time. 3 times more radios than normal.

According to the Secretary General of URTEL, half of the Malian radio stations broadcasted the special program of Studio Tamani those days. A reasonable projection leads to an estimated audience of nearly 4 million listeners, or even more for each of the voting days. It will obviously be necessary to carry out a complete evaluation of our coverage of the Malian electoral process. However, the many reactions and messages of satisfaction received from all sides suggest that Studio Tamani has truly fulfilled a public service mission by contributing to a broad information on the conduct of the vote."