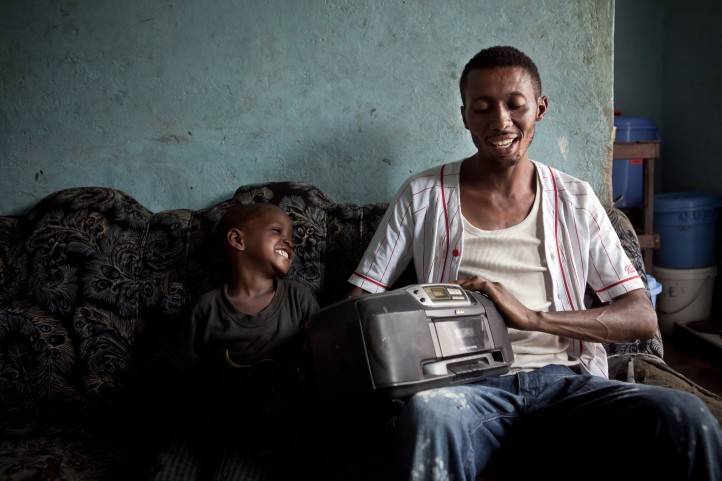 ©Gwenn Dubourthoumieu / Fondation Hirondelle A father and his son listen to the radio in Kinshasa, DRC.

World Radio Day : Our guide to radio communication with the ICRC

Fondation Hirondelle and the ICRC have produced a guide to radio communication in humanitarian contexts. It is presented in Bamako on the occasion of World Radio Day, on February 13.

In spite of the current trends in communication being increasingly oriented towards digital with its endless possibilities for interaction, radio remains a major communication medium. Indeed, it remains by the far the leading communications channel in terms of audience across vast swathes of the world, including sub-Saharan Africa. Radio technology does not require a lot of infrastructure, can be received in even the most remote locations and allows, in certain programming styles, effective interaction with listeners. Radio is also consistently considered to be the most reliable and credible in audience surveys.

From 21 to 23 November 2018, eight Francophone African communication officers from the International Committee of the Red Cross (ICRC), whose mandate is to assist populations affected by armed conflict, met in Dakar to share their experiences in using radio as a humanitarian communication tool. They learned basic radio production techniques, and how to evaluate the impact of their radio communication campaigns, with the help of Adrien Zerbini, a swiss journalist and a trainer from Fondation Hirondelle.

Swiss non-profit Fondation Hirondelle provides information to people facing crises, to empower them in their daily lives and as citizens. In December 2017, the ICRC and Fondation Hirondelle signed a partnership agreement to promote collaboration between their teams in the field.

At the end of this workshop, the ICRC and Fondation Hirondelle produced a radio communication guide, written by Adrien Zerbini. The aim was to keep a written record of good practices in radio communication and to provide ICRC teams and all interested humanitarian organisations with a simple document, easily usable, in two parts:

This guide was produced in French. It is currently being translated by the ICRC into Arabic, English and Spanish. The guide will be presented in Bamako on the occasion of World Radio Day on 13 February, as part of an event organised by Studio Tamani, Fondation Hirondelle's news programme in Mali, with URTEL (Union des radios et télévisions libres du Mali), the Maison de la presse de Bamako, and the ICRC.  The Malian Minister of Reconciliation will participate in the discussions on the role of radio as a tool for dialogue and tolerance. Representatives of Malian civil society, the media, and the international community are expected among the participants.