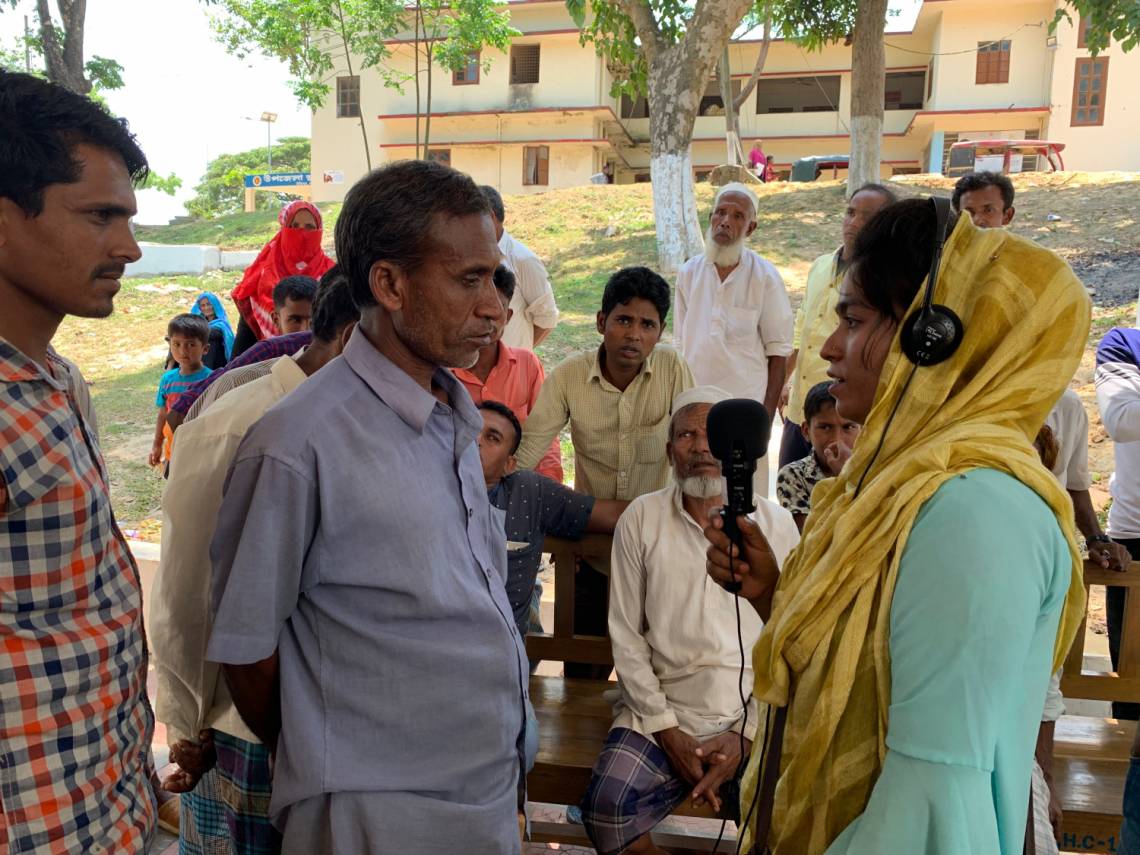 Helping people affected by the Rohingya crisis in Bangladesh: the launch of our new radio programme for Bangladeshi communities near refugee camps.

A new radio programme called Arar Hota, meaning Our Voice, has been launched in Bangladesh by Fondation Hirondelle, in partnership with the local organization Coast Trust. It is aimed at giving information to the local community that can help them to access services and improve livelihoods. Radio Trainer Nancy-Amelia Collins returned to Bangladesh and has been conducting intensive training with a team of 20 people from the local area, who are all passionate about improving the lives of their community. The programme is an extension of our existing work in the Rohingya refugee camps, where Fondation Hirondelle has been operating since mid-2018 with the radio programme Jamtoli Information Line, made by and for Rohingya refugees.

Expanding our work into the host community recognises the impact that the refugee response has had on the local people. The influx of nearly a million refugees from Myanmar into Bangladesh happened quickly in late 2017. Rohingya people, fleeing extreme violence in Rakhine state, made the dangerous journey across the river and into Bangladesh’s southern coastal region. One of the world’s largest refugee settlements sprang up around the hillsides, taking over huge tracts of land. As time goes on, the impact on the Bangladeshi host community in the area is becoming more significant. 40,000 hectares of forest were cleared. Rivers and waterways are polluted, services are suffering, and livelihoods have been affected.

Our new team of host community volunteers extends our programme into the neighbouring areas of Palongkhali and Rajapalong, adjacent to the camps. Six members of the team were trained by Nancy as producers, learning skills in interviewing, recording, and presenting. Their first programme tackles the topical issue of access to health facilities. Through interviewing local people, the volunteers found there is a high level of anger and frustration in the host community because many of their doctors have stopped working in local clinics in order to work in the Rohingya camps, where they can earn more money. A health system that was already stretched is now suffering badly. They went to find out what is being done about it and spoke to NGOs who are also expanding their services to include the host community, including Médecins Sans Frontiers and BRAC. Sharing that information will help to improve access to health care for the local population.

The programme will be played in dozens of locations around the community on portable speakers by volunteer Listening Group Facilitators, in community centres, tea shops and gathering places. Feedback will be gathered from listeners to inform our future programming.

Aror Hota gives voice to local Bangladeshis who are facing increased challenges from pressure on services to economic struggles. The new team of Producers will go on to tackle other relevant issues in the community, giving information about where to access services and advice on health, water, agriculture, women and girls’ empowerment and livelihoods.

This new project in Bangladesh is being implemented in partnership with Coast Trust, a local NGO, and draws on their strong knowledge of the host community in this area. It is funded by Swiss Solidarity and the Swiss Development Cooperation.