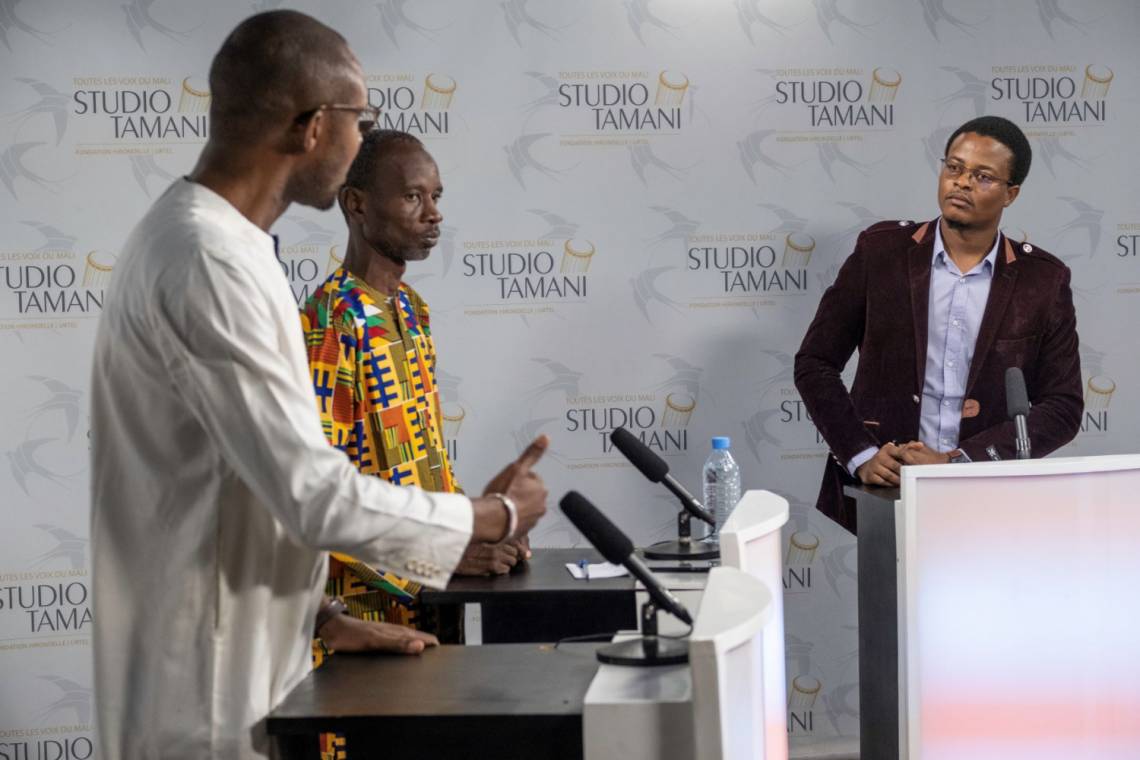 The Challenge of Practicing Journalism in Mali Today: a report from Studio Tamani's editor in chief

The Editor-in-chief of Studio Tamani in Bamako, Mouhamadou Touré talks about the daily challenges of being a journalist in a context marked by multiple crises. An interview published by Heidi.news.

My name is Mouhamadou Touré. I am a Malian journalist and Editor-in-Chief of Studio Tamani, a media created by Foundation Hirondelle, a Swiss NGO, in 2013 in partnership with the l’Union des Radios et Télévisions Libres du Mali. Studio Tamani broadcasts 4.5 hours of programming every day through a network of 85 partner FM radios in Mali, as well as videos broadcast by three television stations. Our news is also accessible by mobile phone. 3.1 million people listen to our programme in Mali every day (Kantar 2020 survey). All Studio Tamani content is also available on our website: www.studiotamani.org and social networks.

My work as a journalist, like that of any other person working in the media, takes place today in the difficult context of the Malian and Sahelian crises. Independence, neutrality and impartiality, in a word, professionalism, must underlie local information provided by any journalist. This is necessary at all times, everywhere, but even more so in a context of multiple crises such as those that Mali is currently experiencing, and has been for years. Giving a voice to every Malian and every inhabitant in the country so that they can be heard and discuss with others to contribute to peace, security and stability in the country is at the heart of our work. This is the mission of Fondation Hirondelle and its media, particularly the one of which I am Editor-in-Chief, Studio Tamani.

But today, in Mali, this mission is becoming more complicated. Access to certain places, particularly in the centre and north of the country, is very challenging due to insecurity. Journalists continue to be killed, kidnapped and attacked. Many remain in the hands of their captors, like our colleague Hamadoun Nialibouly, who was kidnapped more than a year ago in the Mopti region, in the centre of the country. Giving a voice to citizens in these areas on security issues without putting them at risk is complicated. Even some local authorities will no longer speak with the media. Reporting on terrorist attacks without becoming targets is still difficult for local journalists. Their independence in reporting on conflicts between communities is also a challenge. They are often directly concerned by these conflicts themselves through relatives. For them, remaining neutral means taking the risk of being attacked by the parties in conflict.

Today the pressure is stronger. Arrests are multiplying, especially of public figures who express themselves on social media. People are increasingly afraid to speak to the media. This makes it difficult for us to give everyone a voice. One of the last talk shows I hosted on Studio Tamani was about these arrests of public figures. During the programme, one of the guests pointed out that when he was invited by Studio Tamani to speak on this subject, he had to think hard before accepting. At the end of the debate, two of them asked the question: "I hope I didn't say anything that could get me arrested?” And it is becoming even more difficult to find female guests, which is a challenge even under normal circumstances.

The independence of journalists is also complicated in Mali in a context where many media actors do not work in conditions that allow them to be so. Many are paid directly with "perdiems" provided by the organisers of the events they cover.

And of course, another challenge of our time: the circulation of false information further aggravates other crisis factors. Some people think they are journalists and use their smartphones to broadcast "news" without taking into account the basic rules of our profession: fact checking, neutrality and balance. Difficulties in getting to certain localities and in gaining access to sources further complicate our verification work in Mali. At Studio Tamani, we have launched a "fact-checking" programme. Verifying information, to establish the facts, is our daily mission, despite all the difficulties of the context. Agreeing on the facts is the basis for regaining confidence in our society and believing in a better future.