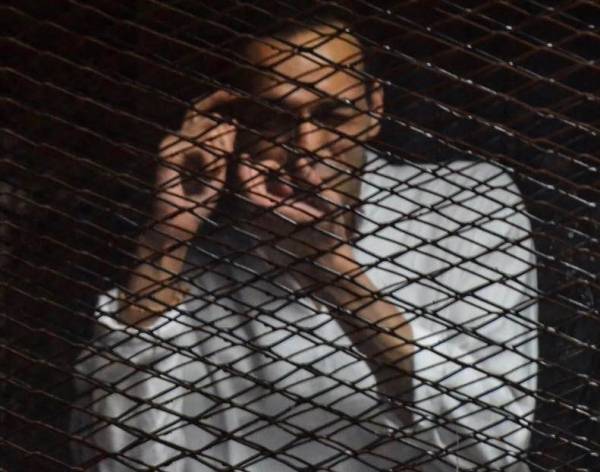 ©AFP Photojournalist Mahmoud Abu Zeid, aka Shawkan, jailed for 3 years in Egypt for doing his job.

An analysis by François Sergent, Editor-in-Chief of JusticeInfo.net, Fondation Hirondelle's website on justice and reconciliation processes, on the occasion of World Press Freedom Day, May 3 2018:

This is a terrible irony given the trial in the book, which has become a symbol of totalitarianism and tyranny.

Justice and press freedom are good indicators of overall freedom in a country. The UN ritually celebrates press freedom for one day on May 3, and this year the theme is “Keeping Power in Check: Media, Justice and The Rule of Law”.
It is right to link justice and media, even if their practices and ways of operating are not the same. A journalist should not be a judge, even though both must respect the rights of victims and treat the accused as innocent until proven guilty.

Transitional justice, which our website covers, is a good illustration of the importance for rule of law. Justice, remembrance, reparations and fair trials should allow communities divided by the horrors of crimes against humanity, genocide or dictatorship to live together again. The path to reconciliation is long and difficult, but we think that the media can help guide the way.

Attacks on press freedom have never been so prevalent, in both developing and developed countries. Journalists are often the first to pay the price when freedoms are under attack. The press has become the constant verbal target of the US President, whilst in countries like Myanmar, Egypt, Burundi, Hungary, Malta, Afghanistan – and the list goes on --, dozens of journalists are threatened, murdered and prevented from doing their work.

Another obstacle is indifference, and here we are all guilty. Indifference to the reconciliation processes, the slow work of Truth Commissions, the interminable trials of the International Criminal Court, seen as not spectacular or sexy enough for much coverage in the media and on social networks. Not seductive enough, as Ms Burstner would say.

We at JusticeInfo.net will try, humbly but determinedly, to remove this obstacle. We find stories about justice extremely interesting.