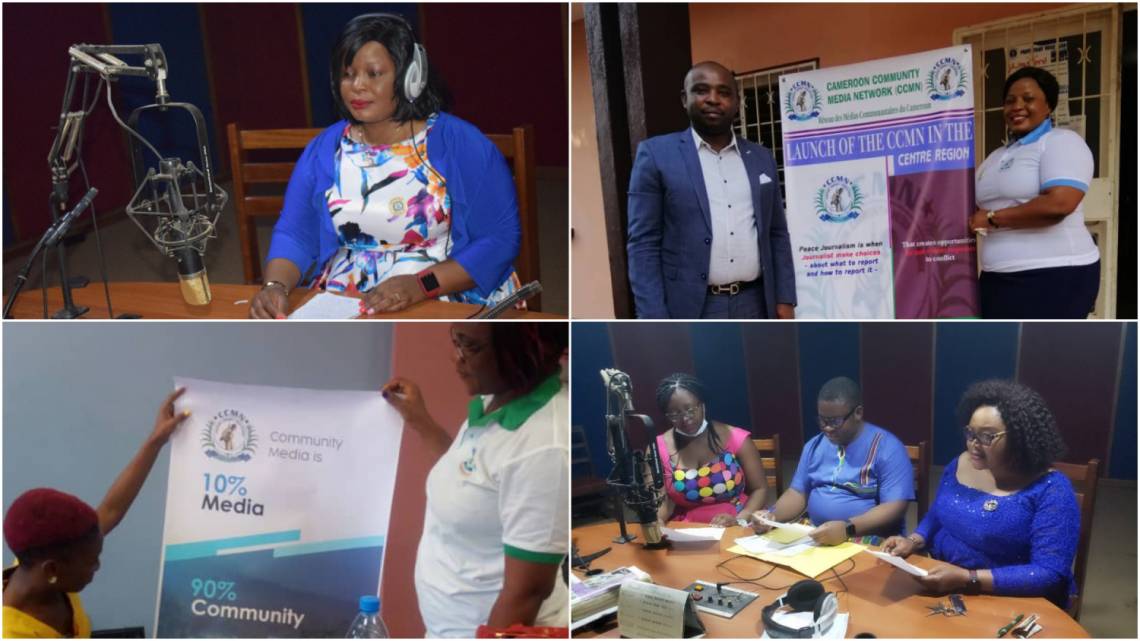 ©CCMN Awareness-raising activities and productions implemented by CCMN teams and member medias, with the support of Fondation Hirondelle.

Cameroon: community radios on the frontline to counter misinformation on COVID

As part of its response to counter the “infodemic” on COVID-19, Fondation Hirondelle has developed partnerships in Cameroon with the Cameroon Community Media Network (CCMN), the Society for the Promotion of Initiatives in Sustainable Development and Welfare (SOPISDEW) and the Cameroon Red Cross (CRC).  Multimedia content has thus been produced and broadcast across the country, through community media and mobile phones. The program is supported by the European Union’s Instrument contributing to stability and peace (ICSP).

“Cameroon is faced with multiple crises. Boko Haram in the North, the refugee crisis in the East, the conflict in the Northwest and Southwest Anglophone regions… These crises have caused movements of populations to other regions. There is an influx of internally displaced persons all over the country. COVID-19 came like a storm, especially in the zones faced with armed conflicts”. Rosaline Obah is the National Coordinator of CCMN, a network of over 350 local organizations, community media, radio, television, print and online media as well civil society organizations covering 8 of 10 regions in Cameroon. “We started in 2017 with only 25 members in the Southwest region. Our focus is to shift the narrative from traditional journalism to peace journalism, explains Rosaline Obah. We organize capacity building workshops for media people and CSOs working for peace. We want to promote solution oriented journalism, making sure that the voices of the common people are highly reflected.”

As part of the grant received from the European Union’s Instrument contributing to Stability and Peace (IcSP) to fight the infodemic and misinformation related to the COVID19 pandemic and strengthen the resilience of affected populations, Fondation Hirondelle developed partnerships with the Cameroon Community Media Network (CCMN), the Society for the Promotion of Initiatives in Sustainable Development and Welfare (SOPISDEW) and the Cameroon Red Cross (CRC).

Between June 2020 and January 2021, CCMN and SOPISDEW produced and broadcast multimedia content nationwide to respond to the concerns of affected populations in the country, particularly to counter rumors and debunk fake news that risked increasing tensions among communities. “People were not prepared. They never believed that COVID would reach Cameroon. A lot of people saw it as a scam, explains Rosaline Obah. No matter the measures from the WHO or the authorities, a lot of people see it as an attempt by the government to make more money. It was a challenge to reach out to communities, to make them accept that this disease is real and that we need to take precautionary measures. Media had to work on different kinds of productions in order to have a holistic approach. They needed to use the local languages of the people, first helping them to really  understand what COVID-19 was all about, before focusing on the measures to take to stay safe.”

With Fondation Hirondelle’s support, over 490 radio spots, radio dramas, news updates, and call-in programs were produced by CCMN and SOPISDEW. An average of 7,700 broadcasts on over 55 radio stations were achieved between June 2020 and January 2021. Media content was also produced and broadcast online (on CCMN’s website) and on social media although to a lesser extent, as radio remains the main media for reaching remote areas and populations. “Fondation Hirondelle’s support allowed us as a media organization to play a frontline role in the COVID response in Cameroon, says Rosaline Obah. Thanks to this support, we were able to come up with productions in different formats, that could be digested by every person from any walk of life. We could work with local CSOs to reach minority populations and act as multipliers towards their own communities. A positive outcome was that over 80 radios were interested in re-broadcasting our productions, more than the 55 radio stations that we had identified for the project.”

“The challenge now is to be able to continue producing and broadcasting such programmes, at a time when vaccine is coming. There are so many conspiracy theories, so many misconceptions around it, explains Rosaline Obah. Social media is making this worse. It spreads rumors and fear. We need quality journalism and responsible local media to bring reliable information to the population, and create awareness.”

In addition to this activity with CCMN and SOPISDEW, Fondation Hirondelle signed a partnership with the Cameroon Red Cross (CRC) in January 2021. This includes the production of SMS and voice messages for distribution to mobile phones, in partnership with Viamo – a social enterprise using mobile technology for large-scale information sharing. The messages were developed as part of Risk Communication and Community Engagement joint activities between the Red Cross, the Ministry of Health and other key health and community engagement actors. More than 2 million messages have been sent in just a few weeks. Voice surveys have also been developed to better understand knowledge, attitudes and practice of the population in relation to COVID-19 in order to help inform the communication response. In order to reach new audiences, the partnership with CRC also involves the production of weekly hour-long interactive radio programmes, in collaboration with ten of CRC’s local media partners in seven different regions of the country. The first programmes were broadcast at the end of April 2021, they include the opportunity for listeners to ask questions and the systematic contribution of health and humanitarian specialists.