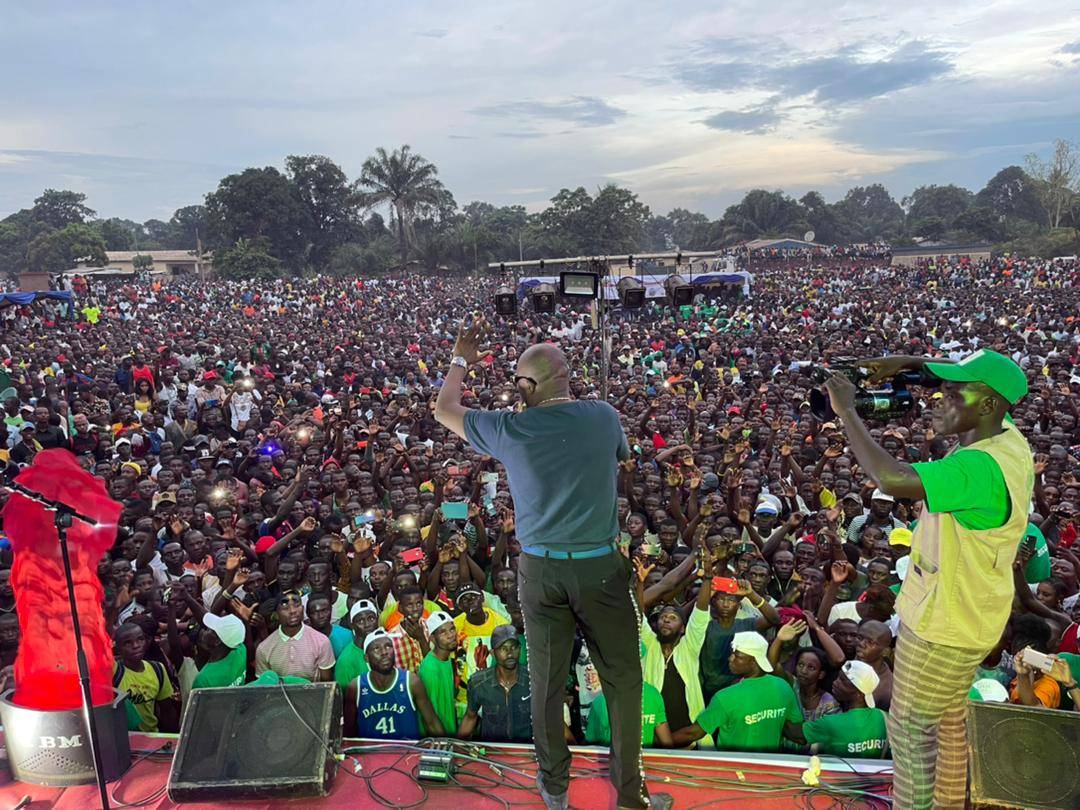 CAR: thousands gather to say "NO" to disinformation with Radio Ndeke Luka

Radio Ndeke Luka (RNL) has been implementing since the end of 2020 in the Central African Republic a campaign to inform and educate the population about the danger of rumours and disinformation. A programme supported by the European Union. In this context, RNL, the most listened-to radio station in the Central African Republic, created and supported by Fondation Hirondelle, organised a public radio show with a large concert on Saturday 28 August 2021 in the commune of Bimbo on the outskirts of the Central African capital, Bangui. The event was attended by tens of thousands of people.

Rumours and disinformation are not new in the Central African Republic, but they have increased alarmingly with the Covid-19 pandemic and the country's political and security situation. Disinformation circulates 'offline', on traditional media, but also on social networks, the use of which is developing in CAR at the same time as access to the Internet. Disinformation has a significant impact on the Central African population. It accentuates the security crisis and further weakens the work of the actors involved in building peace and supporting the democratic process.

Since the end of 2020, Radio Ndeke Luka and Fondation Hirondelle, which created the radio and continues to support it, have launched a campaign against rumours and disinformation with the support of the European Union through a project called #StopATènè ("Stop disinformation" in Sango - local language). This multi-sectoral project takes into account several aspects, including a debunking cell for false information, and mass awareness-raising activities.

It is within this framework that Radio Ndeke Luka organised a large public broadcast on 28 August, mobilising more than fifty thousand people on the grounds of the Bimbo prefectural school on the outskirts of Bangui. The public radio show featured the participation of Central African musical artists Losséba Ngoutiwa and Ozaguin OZ, as well as Roga-Roga, from Extra Musica, and Bill Clinton, former host of Wenge Musica, Congolese musicians who are renowned throughout Africa.

"In the Central African context, in addition to the Covid-19 pandemic, the country is experiencing a security crisis, resulting in many fabricated facts, false information, fuelled by sometimes known actors, for specific purposes. Rumours have for a long time opposed us, divided us and destroyed us," explained Brice Landry Ndangoui, Editor-in-Chief of Radio Ndeke Luka, at the opening of the programme.

The programme was marked by quizzes (questions and answers) on how to sort out the real from the fake, with the accompaniment of bands and artists. This event is part of a series of activities implemented by Radio Ndeke Luka in collaboration with bloggers, civil society organisations and artists to curb the momentum of disinformation in CAR.

"It is time for us to say NO to disinformation and rumours. Let's be awake! Let's check all information before we believe it. This is the message that Radio Ndeke Luka, supported by the government's partner, the European Union, wants to pass on to you here," hammered Félix Moloua, Minister of State for Planning, the Economy and International Cooperation of the Central African Republic, who was present at this public broadcast.

Several tens of thousands of people (more than fifty thousand according to estimates) participated in this major information and awareness-raising event against disinformation. Some came from Bangui and its outskirts, while others came from the interior of the country. This was unheard of for many spectators.

"Since my birth I have never seen such a crowd, thank you Radio Ndeke Luka for organising this event against disinformation. In our city in Bimbo, lies are commonplace," said Erica, 35, a street vendor and resident of Bimbo.

In a comment left on Radio Ndeke Luka's Facebook page following the publication of photos of the #StopATene event in Bimbo, Viviane, an internet user wrote: "Courage to you, our journalists!"

Several political and diplomatic personalities attended this major awareness-raising event against disinformation in Bimbo. In addition to Felix Moloua, Minister of State for Planning, the Economy and International Cooperation, Serge Ghislain Djorie, Minister of Communication and spokesperson for the Central African government, Samuela Isopi, Head of the European Union delegation, Odon Omokoboumon, Mayor of Bimbo, as well as UN and American representatives were present.