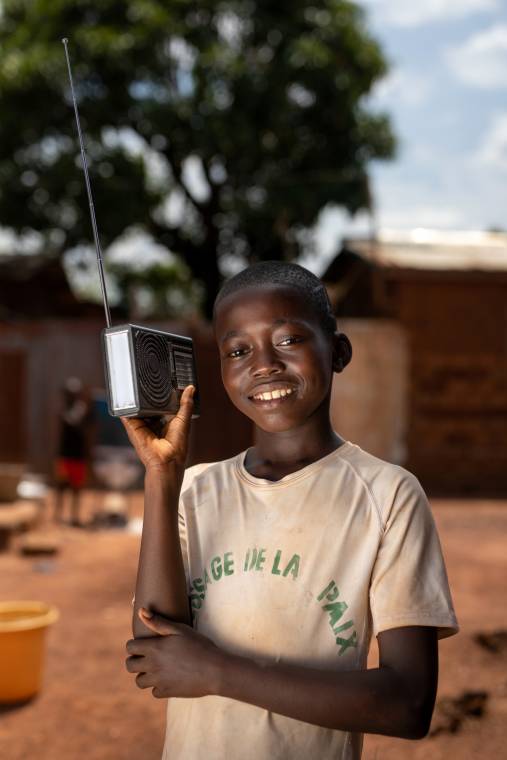 In CAR, a study measures the impact of Radio Ndeke Luka before and after its launch in a remote region

Can we measure the impact of a news radio station on a particularly vulnerable population in a country in crisis ? The installation of Radio Ndeke Luka's new FM transmitter in Beloko, Central African Republic, presented an opportunity to conduct a field study measuring the impact of our radio station before and after its introduction in this remote region of the country. The results of this study reveal a concrete impact and an evolution in the perception of the listeners, particularly on disinformation.

To measure the impact of exposure to our media outlet in the Central African Republic, Radio Ndeke Luca (RNL), we took advantage of the launch of RNL's 24-hour broadcast with a new FM transmitter in the Beloko area (Nana-Mambéré prefecture, in the far west, near the border with Cameroon) to conduct pre- and post-transmitter installation surveys. The first survey was conducted between November 26 and December 2, 2021. The transmitter was installed in mid-December, and the second survey was conducted between 10 and 15 March 2022.

Interviewers, drawn from IMMAR Research & Consultancy's local network, followed a protocol developed by Dr. Jeff Conroy Krutz, Associate Professor in the Department of Political Science at Michigan State University, to ensure random selection of participants, all of whom were of legal age, and to ensure a balance of men and women. A total of 568 people were interviewed before the transmitters were installed and 558 after.

Attitude toward RNL and assessment of the media environment in CAR :

After the start of its FM broadcast, RNL enjoyed an extremely high level of trust from respondents :

Support for democratic and inclusive principles :

The introduction of RNL contributed to a significant increase in support for democratic institutions and principles such as tolerance and nonviolent conflict resolution, with the following measured effects:

Support for the regime of an "all-powerful" president remained statistically unchanged. As an unanticipated effect, respondents became more likely to identify with their ethnic group rather than their Central African nationality, likely reflecting a lack of national cohesion in the country.

RNL contributed to an increase in participation in local community meetings.

However, there was no significant change measured in respondents' interest in politics. In fact, there was a decline in citizens' sense of internal and external efficacy (i.e. the sense of personal capacity to create change, and the responsiveness of institutions); as well as a decline in confidence that officials would actually act to solve certain problems. These results may reflect a greater awareness of the malfunctioning of the democratic system.

Practice and attitude regarding false information :

In response to this scourge, RNL contributed to :

The results of the study, including data collected in other locations, including Bangui, Obo and Birao, will be published in 2023.