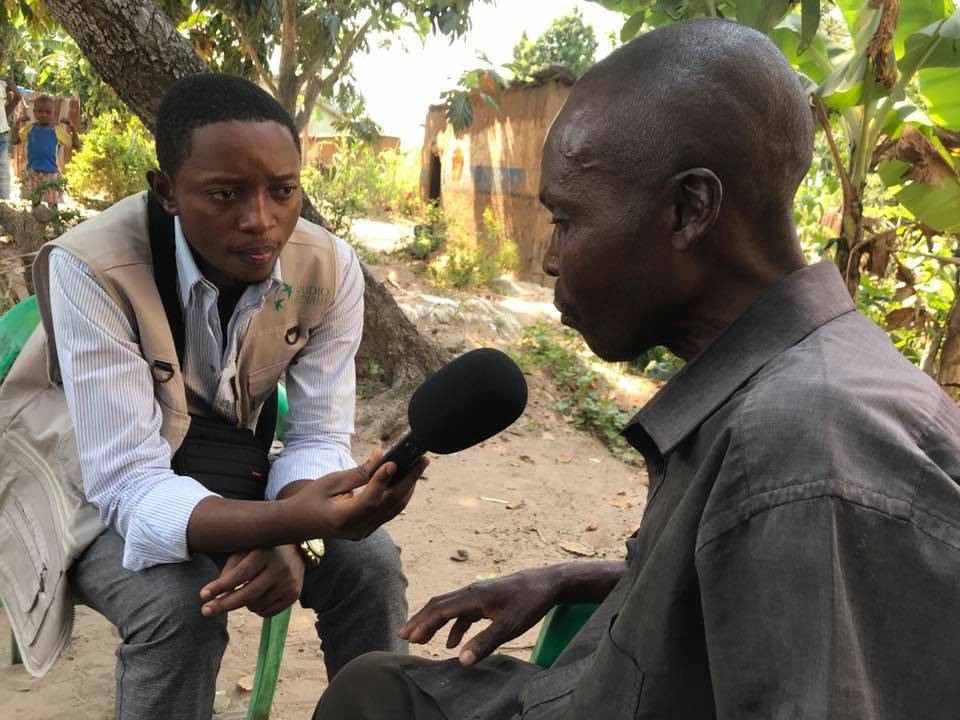 ©Michel Beuret / Fondation Hirondelle A young journalist from the Ngoma Wa Kasaï programme on a reporting assignment in Kananga with Congolese refugees back from Angola in June 2019.

Three community radio stations are broadcasting our new programmes "Ngoma wa Kasaï" since Monday 1st of July 2019 in Kananga, in the Democratic Republic of the Congo. Fifteen other radio stations in Central Kasaï and Kasaï provinces will start broadcasting later this month. Fondation Hirondelle is developing its new "Ngoma Wa Kasaï" programme in the centre of the DRC with the financial support of the European Union and in partnership with Interpeace and the Norwegian Refugee Council.

Kananga listeners have been able to listen to "Ngoma wa Kasaï" since this Monday 1st of July 2019. Three shows not to be missed in the city: at 6:45 am on Christian TV radio (92.8 FM), at 7:00 am on Kananga24 radio (103.5 FM) and at 9:45 am on Radio Diku Dietu (97.5 FM). The objective of this new programme is to give the floor to "all the voices of Kasai". Every week, 120 minutes of programmes in two languages, French and Tshiluba, are now produced by the young team of journalists recruited, trained and supervised by Fondation Hirondelle in Kananga. These programmes are available to partner radio stations in the two provinces of Kasai and Central Kasai, which rebroadcast them at different times in their programme schedule.

For these first programmes, Ngoma wa Kasaï opens its studio to victims of sexual violence in Luambo: minors who have become single mothers; they take their destiny into their own hands thanks to a socio-economic rehabilitation programme. During the first week of Ngoma wa Kasaï stories from ex-militiamen relearning to live in community are brought to light: ordinary citizens work in community fields even with their former executioners and the harvests benefit the whole community. Ngoma Wa Kasaï also tells the story of an ex-military woman converted into a carpenter: with her classmates trained in masonry and carpentry, Jeannette is involved in the reconstruction of the Nganza communal building in Kananga city; this group of fighters burned it down during the Kamwina Nsapu armed conflict. The debate "Diyi Dionsu dia mu Kasaï" (translated from Tshiluba, into French: "Toutes les voix du Kasaï") focuses on the trial of rape perpetrators in Tshikaji: 44 cases, 25 convictions, 9 acquittals!

The Ngoma wa Kasaï newsroom thus let its listeners hear all the voices of Kasaï: young women and men committed to peace, reconciliation and development in Kasaï and Central Kasaï. The programmes broadcasting starts on 3 radios in Kananga. During July, 15 other stations will complete the network of 18 Ngoma wa Kasaï radio partners. There are three stations from Dibaya (Central Kasai) and 12 from Kasai province (Kamako, Kamonia, Mweka, Tshikapa and Luebo). The Ngoma wa Kasaï newsroom produces weekly portraits, columns, magazine, a debate and a weekly newsletter.