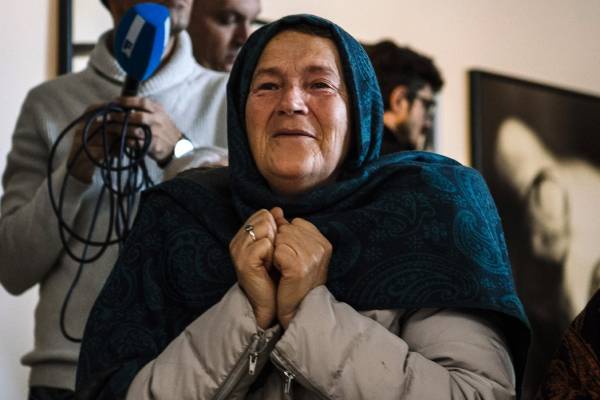 ©Dimitar DILKOFF / AFP A victims' relative reacts as she watches a live TV broadcast of the Mladic judgment from the ICTY in a room at the memorial in Potocari, near Srebrenica on November 22, 2017.

Handing down its judgment on November 22, the International Criminal Tribunal for the former Yugoslavia (ICTY) found former Bosnian Serb military leader Ratko Mladic guilty of genocide in Srebrenica, crimes against humanity and war crimes. He was sentenced to life in prison. Stéphanie Maupas, Correspondent of JusticeInfo.net, our website on transitional justice, explains why this judgment is truly historic.

“The true heroes are the victims and survivors who never gave up on their quest for justice,” said ICTY Prosecutor Serge Brammertz in a statement hailing the judgment. Mladic was found guilty of genocide in Srebrenica, crimes against humanity for ethnic cleansing of Bosnian towns and the siege of Sarajevo, and war crimes for the hostage taking of UN staff to stop NATO intervention. The former Bosnian Serb military commander is still hailed as a hero by the authorities in Republika Srpska and some Serb nationalists in Belgrade and Sarajevo. But General Mladic nevertheless deserted before hearing his judgment. On Wednesday morning, as the judges were listing the persecutions, torture, rape, forcible transfer of population, murders and shelling committed by his forces throughout Bosnia and started on Mladic’s responsibility, the accused asked for a break. He suffers from high blood pressure. His lawyers asked the judges for a pause, but this was refused. Standing up, Ratko Mladic pointed an accusing finger at the judges and loudly accused them of “lying”. He was then removed from the courtroom by three guards, at the request of the presiding judge. In the public gallery, the representatives of detention camp victims, of Srebrenica, Prijedor and other victims listened to the judges’ verdict right to the end.

The courage of the witnesses

Serge Brammertz said that the real heroes -- the witnesses -- “displayed real courage by coming to the Tribunal to tell the truth and confront the men who wronged them”, adding that he would like to “thank and recognize them”. The judgment of over 1,800 pages relates dozens of dramatic events during the war in Bosnia-Herzegovina (1992-1995, over 100,000 dead), survivors of which came to testify at the court during the four years of Ratko Mladic’s trial. One testimony is of a group of Bosnian Muslims who on May 31, 1992 were surrounded near the Vrhpolje bridge at Sanski Most. Four men were killed on the road and another by the bridge. The others were forced to jump into the river one by one. Once in the water, Mladic’s soldiers opened fire on them. Twenty-eight men died, including a minor and an old man. The judgment also tells the story of 24 Bosnian Muslim prisoners who were taken to Manjaca camp in July 1992 in a covered truck. Their water was confiscated and they were forced to eat salt before the 9-hour journey. They drank their own urine to try and survive. Then there is the story of 3-year-old Anita Pisa, who was taking her shoes off in the porch of her parents’ house in Sarajevo on December 13, 1992, when she was shot dead by the single bullet of a sniper from 900 metres away. Justice has now been rendered for her and thousands of others. This justice is precise, technical, devoid of emotion. It aims to be incontestable, and to hold the weapon of documentation against any attempts at revisionism.

Ethnic cleansing as a crime against humanity

One of the main unknowns in this four-year trial was whether the judges would recognize that genocide was committed throughout Bosnia-Herzegovina on Mladic’s orders, as called for by the prosecution. The term is highly sensitive in former Yugoslavia, recalling other dark chapters such as those of the Second World War. ICTY judges have rejected the charge of genocide in other trials with the exception of Srebrenica. They did so again, but this time the tribunal said that in several Bosnian towns, perpetrators “intended to destroy the Bosnian Muslims”. For that, they found Mladic guilty of the worst crime of humanity, that of “extermination”. The judgment was also expected to clarify the implication of Serbia in the crimes committed in Bosnia. This verdict is based on 592 testimonies and 10,000 pieces of prosecution evidence, including Mladic’s speeches to the Bosnian Serb parliament, tapped telephone conversations, videos, the minutes of the Supreme Defence Council in Belgrade and the military registers of the Yugoslav army. Belgrade resisted opening its archives for a long time, but after a standoff with the Tribunal it finally agreed to release part of them if they were kept confidential, although some have been destroyed, including those relating to Srebrenica. They reveal that 90% of the munitions used by Mladic’s troops throughout the war were supplied by Serbia, which also sent arms, supplies and officers, paid by Belgrade. According to the judges, Mladic was in “direct contact” with Slobodan Milosevic, president of what remained of Yugoslavia, with his spy chief Jovica Stanisic, army chief Momcilo Perisic and others. Milosevic died in his prison cell in 2006, before his trial was completed. The other two were acquitted in 2013 in judgments that remain controversial.

Was Mladic an officer and nothing more? That is what his lawyers claimed during the trial. False, the judges replied, pointing to the evidence. He attended the Bosnian Serb parliament, he opposed all the peace plans that did not correspond with the map he had drawn, and he went regularly to Belgrade. When at the beginning of the war in Bosnia in May 1992 Radovan Karadzic announced the “six strategic goals” – including borders that would separate the Serb people from other ethnic communities, dividing Sarajevo and ensuring access to the sea --, Mladic, freshly appointed to the head of the Bosnian Serb army, replied, warning of the enormity of the task. “People are not pawns, nor are they keys in one’s pocket that can be shifted from here to there,” he said. “It is something easily said but difficult to achieve.” He wanted resources. He also wanted to define the territory and designate the enemy, whether it be those “stirring up the Muslim hordes or Croat hordes”. Given a choice between the two, he proposed to choose “the enemies who are easiest to beat and to ally ourselves with the others”. During his trial, Mladic denied having played any political role in Bosnia-Herzegovina. He presented himself as a military leader executing orders, primarily from Radovan Karadzic. But in fact he was everywhere. He opposed peace talks which would stop the joinder of majority Serb territories -- Republika Srpska, Krajina and beyond --, in other words “Greater Serbia”. In 1993, he rejected a plan he deemed favourable to the Croats, so as not to "put the Serb people in the jaws of [Franjo] Tudjman”, the nationalist Croat president at the time. Throughout the war, he blocked humanitarian aid to his enemies or used it as a bargaining chip. In 1993 discussions with General Philippe Morillon, who was trying to obtain deployment of a UN peacekeeping battalion in the Banja Luka region, he claimed to be the “Napoleon of the Balkans”. When he was opposed, he warned that he would not leave Sarajevo “as long as anyone there is still breathing”. Another time, he claimed that “all Bosnia will burn if I go”, and he ordered it. Mladic was active on all fronts, military, political and diplomatic.

Looking to the future

This verdict was expected, but the judgment marks the most emblematic page of the ICTY. It also marks the end of its nearly 25 years of investigations and trials. On November 29, the appeals chamber will decide the final fate of Croat leaders. The UN has set up the Mechanism for International Criminal Tribunals (MICT) to carry out the residual tasks of the tribunals for Rwanda and former Yugoslavia, including the appeals of Radovan Karadzic, Vojislav Seselj and now Ratko Mladic, as announced by one of his sons. The MICT will also conduct the retrial of Belgrade’s former intelligence chief Jovica Stanisic and one of his associates, as ordered by the ICTY appeals chamber. The MICT has also taken over the hunt for the last Rwandan fugitives indicted by the UN tribunal for Rwanda.

After the verdict, some Serb nationalists demonstrated in Sarajevo. In Srebrenica, Radio France Internationale (RFI) reported the anger of a survivor: “This verdict for a man who is nearly dead, what does it mean?” said Muhizin Omerovic. “We have no State and that is the biggest problem here. The country has been divided in two, and that has been legalized, accepted by the international community which staged this big show today.” In Belgrade President Aleksandar Vucic, former ally of Slobodan Milosevic, expressed regret that those responsible for crimes against Serbs had not been convicted, but, he said, “that should not be an excuse to justify crimes committed by Serbs”. United Nations High Commissioner for Human Rights Zeid Ra’ad al Hussein hailed the verdict, calling Mladic the “epitome of evil”. UN Special Advisor for the Prevention of Genocide Adama Dieng said the judgment “is not only about the past but is also about the future. Accountability constitutes a critical component of prevention and also an important step on the path to reconciliation. In a region where we are seeing denial of some of the most heinous crimes committed during the armed conflict and the glorification of war criminals, justice alone will not lead to reconciliation, but there can be no real reconciliation without justice”.

Ever since the first trials of the ICTY, set up by the UN in 1993, Ratko Mladic’s name has haunted all the cases opened against Bosnian Serb soldiers, officers, militia and politicians who have been convicted with him. Right up to his arrest in May 2011, Ratko Mladic’s shadow hung over all the prosecution evidence, orders, testimonies and telephone surveillance. He was missing from the courtroom. His place is now in prison -- for life.