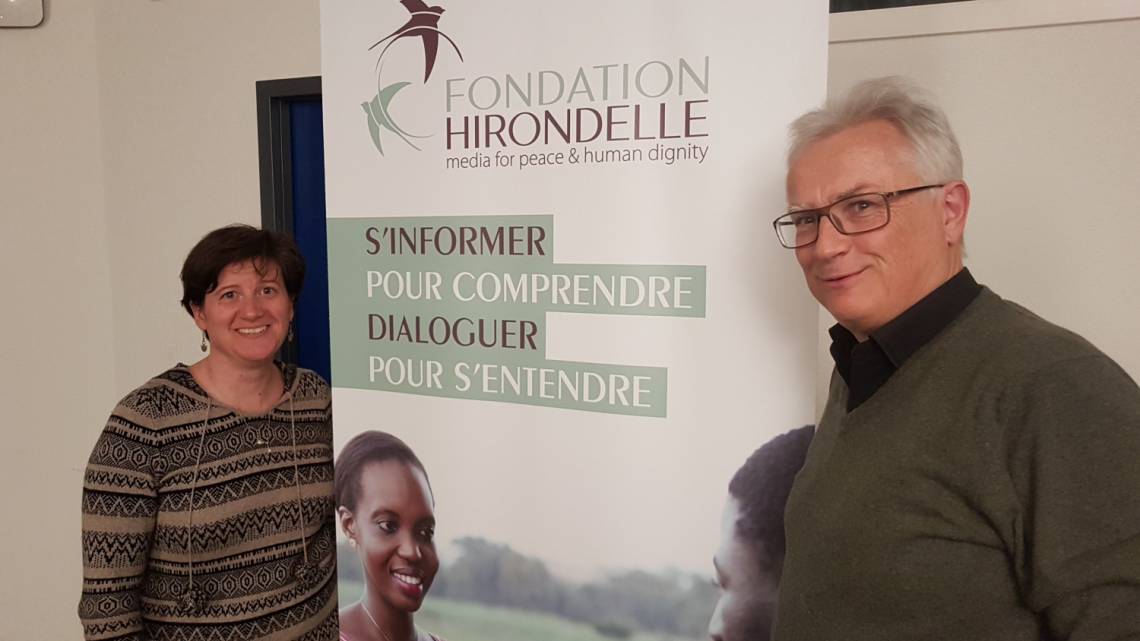 Tony Burgener becomes our new Chairman of the Board

The Board of Fondation Hirondelle, the supervisory body of our organization, has a new Chairman since the beginning of January. Tony Burgener, who just retired after eight years as Director of Swiss Solidarity, has taken over from the Swiss journalist Romaine Jean. Both of them tell us what Fondation Hirondelles means to them.

Why did you agree to join our foundation’s Board?
Tony Burgener: I experienced the birth of Fondation Hirondelle first-hand in 1995. At the time, the founders were walking the halls of the ICRC. As head of press I was interested in this adventure, which I have followed for the past 25 years. A mission that is based on journalistic ethics and humanitarian principles brings together all the values I hold dear. This new commitment is as much a matter of reason as it is a matter of heart.

What do you think is important in the Foundation's mission?
Tony Burgener: I consider the right to credible and impartial information as important as all other rights that protect and support people affected by disasters. As an ICRC delegate, I have experienced several situations where propaganda and misinformation have led to increased loss of life. The Foundation's mission is crucial. It can save lives, facilitate the daily lives of affected populations and/or restore dignity to people in distress.

What will be your role and what do you intend to bring to Fondation Hirondelle?
Tony Burgener: We are living in a period of major changes in the media world as well as in the humanitarian world. I would like to contribute to the debate on these important developments and, together with my colleagues on the Board, to support the management, above all in fundraising and communication. Given my origins, I wish to help the Foundation to become better known in the German-speaking part of Switzerland.

Fondation Hirondelle is celebrating its 25th anniversary this year. Its experience mainly concerns countries facing serious crises... How can this experience be useful for Switzerland today, and for the global debate on the role of media and journalism?
Tony Burgener: Fondation Hirondelle is almost a mirror of the Swiss model and contributes directly or indirectly to the good reputation of the « humanitarian Switzerland ». The quality and reliability of its information, the multilingualism, innovation and creativity as well as its neutrality and impartiality: these are all values that are dear to Switzerland. Thanks to these values and their concrete application, the media developed by Fondation Hirondelle are highly appreciated by populations often disillusioned by disinformation, "fake news" and political propaganda. By respecting these values, its approach and its proximity to its listeners, the Foundation can become a reference for other media projects in crisis contexts and beyond.

Romaine Jean, you have accompanied Fondation Hirondelle at various levels since its creation, particularly in recent years as Chairman of the Board. How do you see its evolution?
Romaine Jean: Fondation Hirondelle is a long love story for me. I have followed it since its beginnings. Today the foundation is doing well, it is multiplying projects, it is recognized and enjoys an excellent reputation. In 25 years, I have been able to see the mass of conviction, righteousness and commitment that it took to bring this work to fruition. It is a collective work that began on the basis of a premonitory intuition on the importance of information to contribute to peace and to the resolution of crises. This idea is more relevant than ever throughout the world, including in the oldest democracies.
Fondation Hirondelle is one big family, which we will not leave, because it is built on very solid values. I am delighted that it is continuing with a renewed board, with a new president, Tony Burgener, who is a friend and a committed personality with integrity, a great network and a great reputation. The Foundation is in good hands, also because the transition between the management teams took place in harmony, without conflict, and in the pursuit of a common vision.