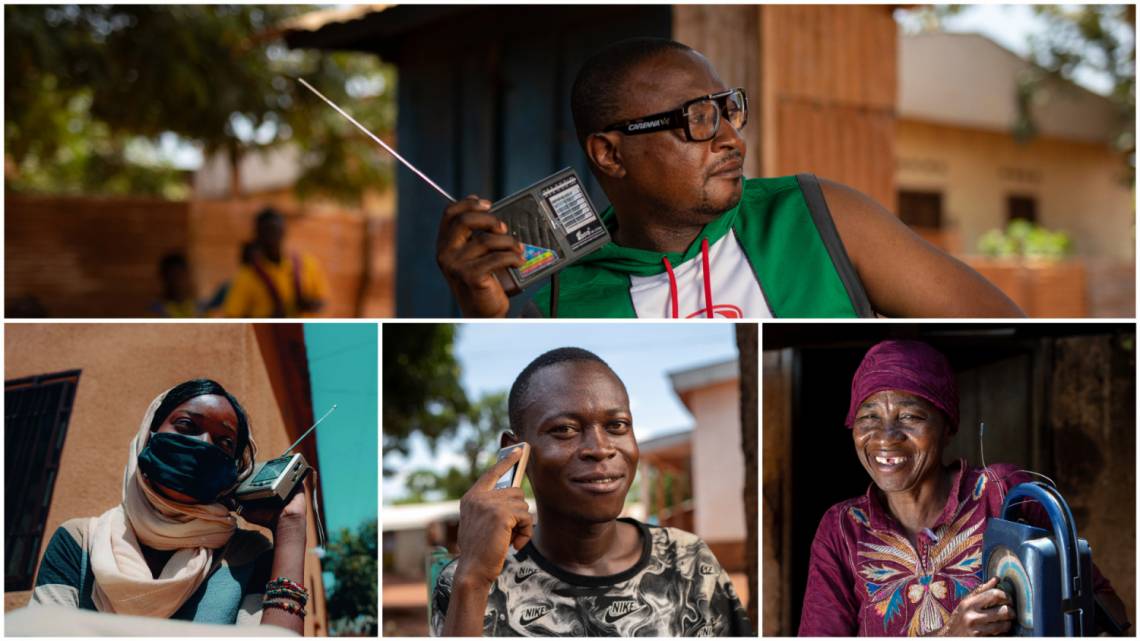 Radio is by far the most followed and trusted media in the Sahel and Central Africa. Fondation Hirondelle's programmes in Mali, Niger, Burkina Faso, Central African Republic, Democratic Republic of the Congo and Madagascar are regularly followed by 7.143 million people, via our partner radio and television stations or our own FM transmitters (in CAR). Ninety-one percent of people consider these programmes 'useful or indispensable' for their daily lives. These are some of the results of a multi-country audience study conducted at the end of 2020 by the Kantar Institute, a leading international market research company with an established expertise in French-speaking Africa.

The main objective of the study was to measure quantitatively and qualitatively the impact of the news programmes developed by Fondation Hirondelle and its media to help populations cope with the "infodemic"  during the coronavirus crisis. In the 6 countries, the programmes developed by Fondation Hirondelle are followed each week by 7,143,400 individuals aged 15 and over. In Mali, for example, the Studio Tamani programme, broadcast for 3 hours each day by a network of 80 radio stations and 3 television partners, is followed regularly by 28.8% of the population. Radio Ndeke Luka, the only media with continuous broadcasting on its own network of FM transmitters, achieves exceptional scores in the Central African Republic, with an average weekly audience of 84.4% and a daily audience of 71% in Bangui and 62% in Bambari. It is the leading media in the country, known by 97% of the people interviewed!

"Taking into account the specific characteristics of each country and the specific broadcasting conditions (broadcasting slots, programme format, partner radio and television networks), Fondation Hirondelle's programmes are performing well, particularly in the Central African Republic, Mali and Niger, but also in Madagascar, in view of the programme's recent launch,” says Kantar in its report. “In addition, there is an overall outperformance outside the capital cities, in all countries." Indeed, the results of our radio programmes (some of which are also filmed and rebroadcast by partner television stations in Mali and Niger) are clearly higher in the regions, in Niger, Mali or the DRC, than in the capitals, where the media landscape is more diversified. In Niamey, Bamako or Kinshasa, the partner radio stations that broadcast our programmes often have modest audiences, compared to commercial and international radio stations. In the secondary cities tested, the scores of our partner radios, and therefore of our programmes, are much higher, such as in Tshikapa in the DRC, Filingué in Niger or Ségou in Mali, where our partner radios are the most listened to, and where our programmes obtain respective scores of 8%, 15% and 17% of regular audience.

Our programmes reach both men and women, young and old. This is a real source of satisfaction. This corresponds to our promise to provide information that speaks to everyone, and to bring together all the components of the societies in which we operate. Radio Ndeke Luka's audience in the Central African Republic is composed of 69% of 15-34 years old, and 47% of women, whereas the news media generally have a very male and older audience. In Madagascar, 90% of Studio Sifaka's listeners are under 34: the target is reached for a programme aimed at young people. In Mali, Studio Tamani has 47% of women listeners and 53% men with a programme focused on information and dialogue, and its audience includes all strata of society with 25% who don’t have any school degree, 15% with primary education, 31% with secondary education and 30% with higher education.

Another very positive result is that the appreciation of our programmes is very high, as is the recognition of their usefulness and the reliability of our information. Thus, 91% of those who follow us consider our programmes "useful" or even "indispensable". Ninety percent consider our information to be "reliable", 85% that the programmes are "close to (their) concerns" and 87% that the programmes "give voice to different points of view and are balanced/unbiased".  The impact of our productions is concrete, and felt by our audiences: 85% say that our information has already led them to "change their behaviour", and 82%, their opinion. Seventy-six percent also say that listening to our programmes has led them to "get involved or become more active in community, civic or political life". This impact of our programmes is particularly marked among our listeners in Burkina Faso, Niger and the Central African Republic, and generally in secondary cities.

Regarding perceptions of the COVID crisis, 86% of our audience believes that our programmes have been well-adapted to deal with the health aspects, as well as the economic consequences of the pandemic. More generally on this subject, and beyond our audience, the results of the study indicate that the populations of these 6 African countries are worried and feel directly impacted by the pandemic: 74% of respondents say they are "very worried" about the COVID-19 situation, and 75% say that it has an impact on their daily lives. Sixty-nice percent are afraid of getting sick. However, these people remain optimistic: 70% believe that the economy will recover quickly once the COVID crisis has subsided.

However, the pandemic is driving people to become more informed, both in Africa and elsewhere: 46% of respondents say they are consuming the media 'more often' because of the COVID crisis, compared to 38% 'as usual' and 16% 'less often'. The public also recognises the adaptability of the media in reporting on the crisis: 91% of respondents believe that the media have adapted well during the crisis. However, 54% felt that COVID-19 had taken too much space in the media.

The traditional news media (radio, TV, written press) are by far the most important source of reliable information on COVID-19 for the population of the 6 African countries surveyed: 60% of respondents cite these media as their most trusted source, ahead of the government and national administrations (26%), and international organisations such as the WHO or the UN (20%). The Internet and social networks were the next most trusted source with 8%, as were local associations and NGOs (7%) and traditional leaders (7%). Among the news media, radio is the most trusted source of information about the COVID crisis, with 63% of respondents trusting it, followed by television (34%). Less than 2% of respondents trust the Internet.

MEDIA CONSUMPTION IN AFRICA - Radio remains the leading and most credible media for the population of the 6 countries studied:

- In these countries, radio reaches the entire population: men and women, young people, the privileged and less privileged populations

- Radio listening is primarily done on FM, via a radio or via the FM receiver integrated into mobile phones. Listening via the Internet (app, streaming or podcast) concerns only 1% of respondents.

- Only 27% of those aged 15 and over connect to the Internet every day or almost every day, 53% never connect

- Of those who do go online, 59% do so primarily to consult social networks, of which Facebook remains the leader with 81% of Internet users in the 6 countries having an account

Methodology of the study

Kantar's teams carried out a total of 9,000 interviews with face-to-face data collection on a tablet in the homes of the interviewees, selected according to the statistical method of quotas. This methodology guarantees a complete collection of information, a good geographical dispersion within the areas surveyed, and a sample structure representative of the population aged 15 and over. The surveys were conducted between 14 October and 27 November 2020 in 19 locations, including capital cities, secondary cities, and smaller settlements in rural areas of the following countries Mali (Bamako, Sikasso, Kayes, Segou); Burkina Faso (Ouagadougou, Bobo Dioulasso, Ouahigouya); DRC (Kinshasa, Lubumbashi, Mbuji-Mayi, Bukavu, Tshikapa); Niger (Niamey, Birnin Konni, Filingué); Central African Republic (Bangui, Bambari); Madagascar (Antananarivo, Ambovombe).

A collaboration with Viamo, a social enterprise specialising in the distribution of content on mobile phone platforms, also made it possible to collect the responses of 270,000 people to a telephone survey. This data was used to supplement the data from the field study and to contribute to the extrapolated calculation of national audiences.

All data was processed and analysed by Kantar in the first quarter of 2021, with detailed reports for each country. These reports were presented to Fondation Hirondelle teams in March, in order to learn lessons that will enable us to adapt our programmes as closely as possible to the needs of our audiences.

The part of the study carried out in the Sahel (Mali, Niger, Burkina Faso) and in Central Africa (CAR, DRC) was financed by the European Union's Instrument for Contributing to Stability and Peace, as part of our COVID response programme in these five countries. The study in Madagascar was funded by the Swiss Cooperation (SDC).