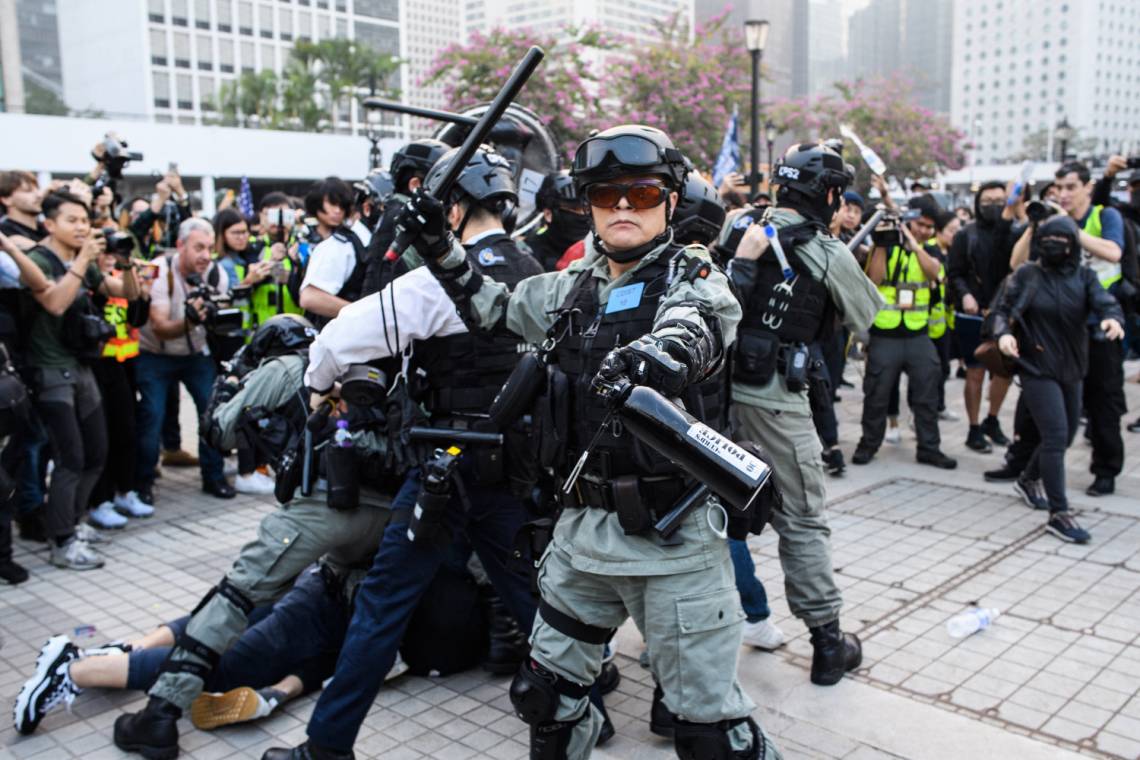 ©Anthony Wallace / AFP During a demonstration in Hong-Kong, in December 2019.

Since the beginning of the 2010s, violence, whether armed or not, has changed and been fuelled in diverse ways on social networks. Journalists need to be more careful and resourceful reporting on it without stirring it up. Read more about it in the seventh issue of our biannual publication, "Mediation", to be downloaded above, with interviews and testimonies of journalists and researchers, figures and maps to nourish the reflection, and to give leads for action.

In a world where the amount of information available increases exponentially each year, generating a fierce battle for public attention, it can be tempting for the media to give violence massive coverage, although it is not particularly on the rise. Armed violence is responsible for only 1% of deaths worldwide, and only a quarter of those are in conflict. Moreover, as the Canadian sociologist Steven Pinker[1] taught us ten years ago, armed violence is declining overall over the long term, although there has been a slight increase since the beginning of the 2010s. But conflict is one of the things that will always attract human attention, says sociologist Gérald Bronner in a fascinating essay on the economy of the Internet and social networks[2]. Disseminating violent content, or content that stirs up violence, can thus capture the public's attention. Some media and social networks use this fact to generate audience, or "clicks".

But the role of journalists, and of the news media, is also to cover violence: conflicts, wars, terrorism and extreme violence, violence against minorities. Violence has changed in recent years. Alongside the classic conflicts between States or politico-military groups (e.g. Afghanistan, Syria and Yemen), particularly deadly wars involving mafia groups (Latin America) or sporadic but repeated attacks against civilians over a vast territory (West Africa) are developing. In all these conflicts, information is a major issue. The parties to the conflict now use social networks both to spread their propaganda and to encourage the publication of false information designed to keep the population in a climate of uncertainty and fear. They tend to dismiss or even target journalists, especially local ones, some 60 of whom are killed each year in the course of their work.

In this insecure and shifting terrain, journalistic techniques and precautionary measures must be reinvented in order to report credibly on violence without contributing to its propagation. The use of new technologies, including open source intelligence (OSINT) from the Internet and social networks, can help. Other things that can help even more are an approach aimed at getting the victims’ voices heard and explaining the complexity of the violence, its root causes and history -- or even trying to bring stakeholders into dialogue, so that journalism covers violence and also contributes to reducing it.

Created in the aftermath of the Rwandan genocide, Fondation Hirondelle has chosen to work through journalism and supporting media in countries that have been scarred and weakened by conflict. By providing reliable, local information, we strive to reduce fear, rumours, and violent responses to crises. Our work is also about contributing to (re)creating the possibility of dialogue, a non-violent media space, built on the basis of shared facts and realities.

Twice, weapons have silenced our media: in Bukavu in 1996 when Laurent-Désiré Kabila's troops left for Kinshasa, and in Monrovia in 2000 on the orders of Charles Taylor's army. Unfortunately, violence remains the daily reality for millions of our listeners today in the DRC, the Sahel, the CAR, and Myanmar. Dealing with it is therefore at the heart of our work. This requires rigour and irreproachability in our newsrooms, but also courage on the part of all of us, in the face of risks. The quality of information produced, its local roots and representativeness, accompanied by training in journalism and security in crisis zones are essential, as well as transparency and dialogue to explain our work and make it accepted by all parties.

Read or download the full Mediation n°7, "Violence and the Media"