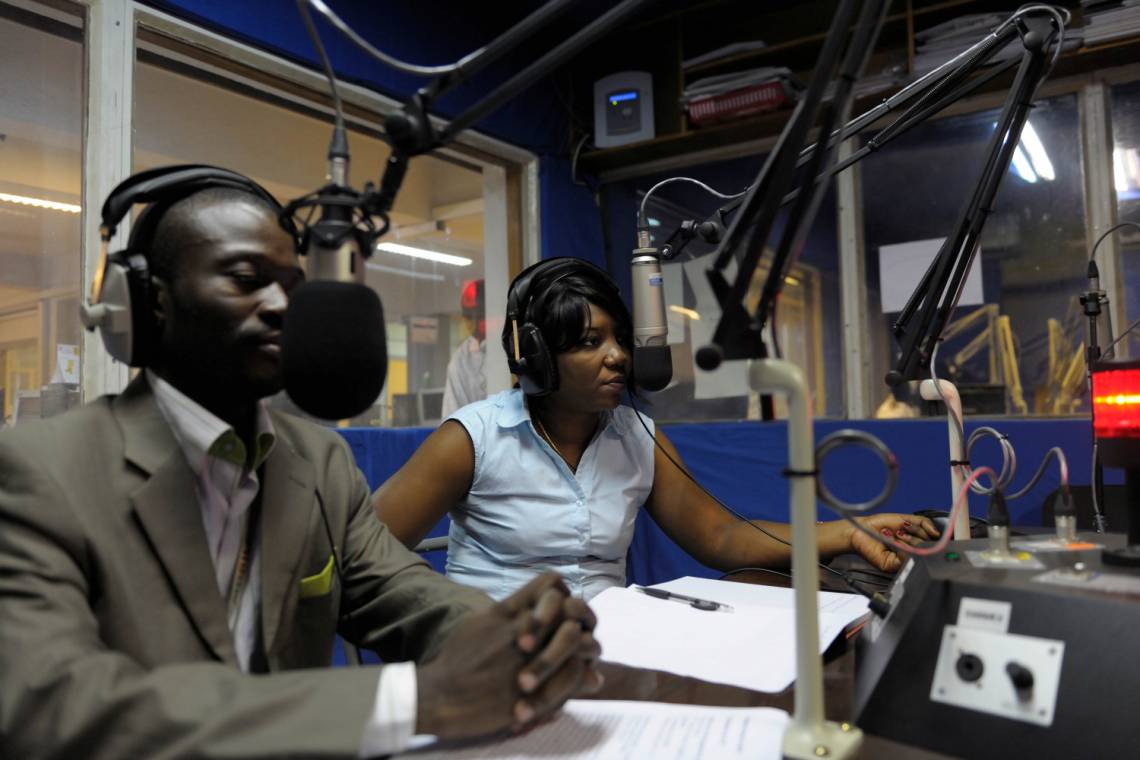 Radio Okapi: 20 years of commitment to peace in DRC

Radio Okapi, the United Nations radio in the Democratic Republic of Congo, celebrates its 20th anniversary on Friday 25 February. It was created in 2002 in partnership with Fondation Hirondelle, which co-managed it with the UN peacekeeping mission until 2014. Interview with our Director, Caroline Vuillemin, and the Head of Radio Okapi for MONUSCO, Etienne Rougerie.

On 25 February 2002, the first Radio Okapi programmes were broadcast in the Democratic Republic of Congo. A joint project of the United Nations through the United Nations Organization Mission in Congo (MONUC) and Fondation Hirondelle, which participated in its creation, co-management, development and training of teams from 2002 to 2014. This collaboration allowed the emergence of one of the largest radio stations in French-speaking Africa, which is celebrating today its 20th anniversary. Since the partnership ended 8 years ago, Fondation Hirondelle has remained active in the DRC.

On the occasion of Radio Okapi's anniversary, we propose a cross interview with our director Caroline Vuillemin, who lived through the beginnings of this ambitious project and accompanied it for many years, and with Etienne Rougerie, who accompanied the development of the newsroom for several years and who is today the Head of the Radio Okapi service for MONUSCO (UN Mission for the Stabilisation of the Congo).

What is your message for this anniversary, and how would you describe Radio Okapi in a few words?

Caroline Vuillemin: First of all, i wish a happy anniversary and congratulations on 20 years! When on 25 February 2002, at the same time as the Inter-Congolese Dialogue in Sun City, South Africa, broadcasts began to reach the four corners of the DRC, no one thought that Radio Okapi would become the reference media and a part of the daily life of the Congolese people, "their radio" as they have so often said on the air and during audience surveys. Congratulations to all those who have made it and are still working on it, and thanks to the public for its trust and loyalty.

Etienne Rougerie: After 20 years of existence, Radio Okapi is the first, and almost the only, national media, thanks to its network of 42 FM transmitters and the community radio stations that rebroadcast its programmes free of charge. The second FM network is RFI with 9 transmitters. Radio Okapi is also the country's leading website and Facebook page for information. On the Vodacom telephone portal alone, to which we recently added Radio Okapi, there are more than 100,000 hours of programmes listened to per month, mostly in national languages.

What is your analysis of Radio Okapi's role in the Congolese media landscape over the past 20 years?

Etienne Rougerie: Radio Okapi plays an important role in supporting the Congolese media. We are often the only source of national information in a country where the media are mainly local. Our information is widely reported, which helps these media to go beyond the local vision of the issues at stake. By daring to deal with sensitive issues, we open the way for our colleagues. We are proud to see our programme formats adapted by radio stations in different cities across the country.

Caroline Vuillemin: Radio Okapi has played and continues to play a unique role in the Congolese media landscape. Its specificity is largely due to its creation, a partnership between the United Nations Peacekeeping Department and Fondation Hirondelle, for the implementation of an independent radio station, at the service of the population and of peace, accessible throughout the country. This model was unique at the time, and still is. Only the combination of the means and political will of the United Nations and the journalistic and media know-how of the Fondation Hirondelle, with the precious support of donor countries, made it possible to cover this country-continent, to work in 5 languages and to give voice to the voiceless. Even if this partnership ended in 2014, the fundamentals still mark the radio.

It has often been said that Radio Okapi in its early years reunified the country through the airwaves and I believe that this is one of its greatest successes. The other major contribution was to make dialogue and debate available to everyone, particularly with the flagship programme "Dialogue entre Congolais", which remains a model of its kind. Politicians, army generals, representatives of civil society, artists, everyone has come and gone to express themselves in a balanced and constructive debate. This culture of dialogue is a fundamental value of the Fondation Hirondelle, as it is of the United Nations, and it remains essential today for the consolidation of peace and development in the DRC.

What are the prospects for Radio Okapi after 20 years?

Etienne Rougerie: Radio Okapi must evolve. The last 20 years were dominated by security issues. The gradual improvement in the country's stability is changing priorities: development is finally becoming the central issue. We are working to establish new partnerships to respond to this. For example, UNICEF wanted to help us develop a new FM network specifically targeting young people. This project is called Bana Okapi.
The United Nations Security Council, in its resolution 2612 of last December, invited Radio Okapi and its potential partners to reflect on a future after the departure of MONUSCO, so as to ensure the continuation of a tool that has proved to be indispensable for peace and development in the DRC.

Caroline Vuillemin: The Congolese media sector has changed a lot since 2002, it has diversified and become richer with many actors. But it remains fragile and the population needs independent media, of reference and national scope, at the service of the general interest. This is the mission that Radio Okapi must continue to fulfil.